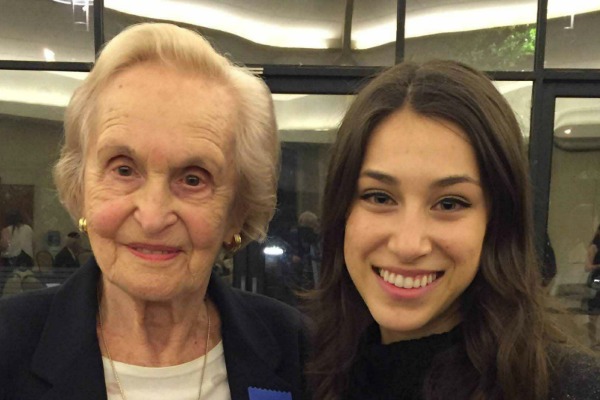 Livia was born in 1925 in a small town outside of Satu Mare Romania called Micula. The town only consisted of a few hundred people.

Livia was one of ten children.

In 1944, at the age of eighteen Livia went to visit her older sister in Budapest. Around this time the Germans occupied Hungary and Livia’s father wrote her a letter asking her to come home. The next day her father sent her another letter saying “if you can stay, stay there.” Her father thought that Livia and her sister would have a better chance to survive if they were in a big city, as opposed to her small hometown where everyone knew she was Jewish. Because Livia’s father told her to stay in Budapest, her father saved her from getting sent to Auschwitz. This letter marked the last time she would hear from him.

While in Budapest Livia was relocated to a Jewish home. Livia was able to stay in Budapest because of the citizenship papers she received from the Swedish ambassador, Raoul Wallenberg. These papers protected her from deportation because they held her under the jurisdiction of Sweden.

Shortly after, Hungary denounced Germany and another government took over thus making the papers invalid and causing Livia to lose her protection.

During this time Livia went into hiding with three of her girlfriends and a boy. One night the boy went to a dinner party and got drunk. He told the host of the party that he was Jewish. The lady of the house informed the Nazis that she knew where Jewish people were staying. German officers and Nazis came into Livia’s room late at night and slapped and hit her. Livia was then sent to jail.

From the jail Livia got sent to the Budapest ghetto. There she worked as a nurse. Every night Livia and her brother would sleep in the basement with hundreds of other people. During the day all they were given to eat was bread with mustard.

One day in the ghetto Nazis stood at the entrance with guns. Livia and some of her friends ran up into the attic of a building in hopes that the Nazis wouldn’t look for people in the attic. Hours passed and no sound was heard outside. One of her friends checked to see if the Nazis had gone, they had.

In January of 1945 Livia was liberated and was later reunited with 4 of her siblings. Her parents and five other siblings did not survive.