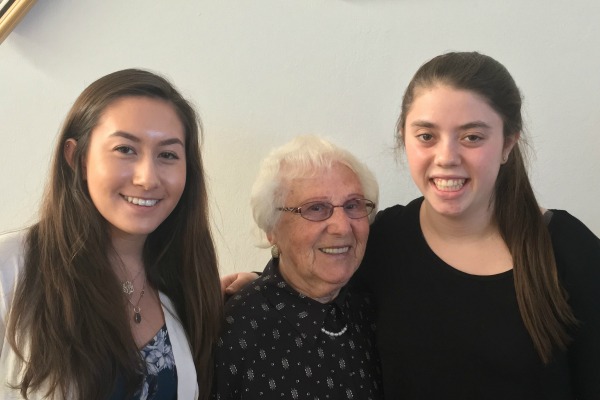 Luba was born in Szydlowiec, Poland into a family of 8 originally as Leba. She remembers it was a Friday afternoon when she was about 13 years old and was watching her younger sister when she heard planes fly above them. It was September 1, 1939, the day when the Nazis invaded Poland. She distinctly recalls the fear that the Nazis conjured in them. They burned down the synagogues and forced Jews to watch them torture a rabbi by pulling his beard out. After seeing the cruelty imposed on her community, she had little faith in God and exclaimed to her dad, “we have no G-d.”

One night, the Nazis made all the Jews come to the main street and divided them by age. The Nazis wanted all the 19 year olds to come back in the morning. Luba proposed she go in place of her 19-year-old sister, confident that the Nazis would realize they had made a mistake and send her home. Her family was extremely reluctant to agree because she was just a child, but the next morning her sister made up her hair and gave her heels in order for her to look older. Luba was ordered to go in the cattle car and was driven to a labor camp an hour away, but Luba remembers feeling as if the drive took hours.

At Skarzysko[1] labor camp, she worked on sealing bullets at the munitions factory. They slept in barracks without pillows or blankets. For lunch they were only given water, soup, and bread. She remembers chewing on the bread like chewing gum to make it last longer. On Sundays they were given coffee but instead of drinking it, they took turns washing their hair with the combined cups of coffee.

In 1944 Luba was sent to a factory in Czestochowa, and later to Bergen Belsen[2].

There, everyone was taken outside to be counted and to be given a number. Luba’s identity and fate rested in six digits: 143683. She drew her number in the snow which allowed her to memorize it and escape being sent to Auschwitz. At the end of 1944, Luba was taken on a death march. They passed by camps Bourgal, Turkeim, and Allach. Luba and the others only slept two or three hours in the freezing cold under a tree, and woke up to one piece of bread to eat for the whole day.

After almost six months, she was liberated by the Russians and went to Feldafing displaced persons camp[3]. After resting for fifteen hours she met another survivor. She asked, “Are you my brother?” He responded sweetly, “I’m not your brother. But I can be your brother if you want. And I have another brother living in Palestine, so he can be your brother too.” Luba and Beenum talked for hours, a liberating experience since they had not been able to speak freely in years. The first ship came to Feldafing and invited them to go to Israel, what was called Palestine during that era. Beenum went to Israel, leaving Luba behind. He promised that his friend, who was also a survivor, would protect her and be with her when he left. This friend would become Luba’s husband in the United States, where they moved together in 1947.

[2] Bergen-Belsen was a concentration camp in lower saxony established in April 1943. It had 5 satellite camps. (Encyclopedia of the Holocaust, volume 1, pg 185-190)

[3] Feldafing had been a summer camp for the Hitler Youth, but became the first Jewish only displaced persons camp. In years after the war, culture, religion, education, and youth life came alive in the camp (United States Holocaust Memorial Museum).