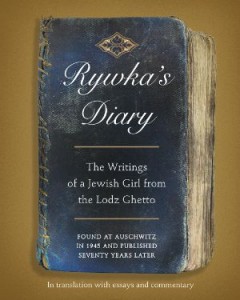 Rywka’s Diary: The Writings of a Jewish Girl from the Lodz Ghetto—first published by the JFCS Holocaust Center in 2014—was recently featured in The Algemeiner.

The handwritten diary—miraculously discovered intact amidst the rubble at Auschwitz—is a moving account of the life and dreams of 14-year-old Polish girl Rywka Lipszyc. After more than 70 years in obscurity, the diary was finally published in 2014 and soon after became a worldwide success. The diary has gone on to be translated and published in 15 languages.

When The Algemeiner spoke last month with Dr. Anita Friedman — the executive director of a Holocaust education center in San Francisco whose unsparing efforts resulted in the publication of Rywka’s Diary in 2014 — the focus of the discussion was on the diary’s significance in understanding how the Nazi persecution of the Jews evolved from the Kristallnacht (“Night of Broken Glass”) pogrom to a full-scale program of extermination. More than one hundred Jews were slaughtered during the night of Nazi violence on Nov. 9 and 10, 1938, with 30,000 Jewish men deported to concentration camps, and hundreds of synagogues, homes, Jewish-owned stores and hospitals incinerated across Germany and Nazi-controlled Austria. Alongside the 1935 Nuremberg Laws that effectively classified Jews as subhuman, Kristallnacht was a critical milestone in the coming Holocaust that took Rywka Lipszyc and millions like her.

But with the Pittsburgh synagogue massacre of Oct. 27, Friedman’s latest initiative to promote the diary and its lessons has taken on an unexpected urgency. “The attack on the Tree of Life Synagogue in Pittsburgh showed the world that the antisemitic violence we commonly associate with the past — with pogroms, persecution and the Holocaust — is alive and well today,” Friedman told The Algemeiner in an email on Wednesday. “It is more important than ever to educate new generations through firsthand accounts like ‘Rykwa’s Diary’ about the devastation wrought by antisemitism, so that we can commit to ending it.”