I often start my workday looking for the worst in humanity: checking for the latest news articles on the Holocaust, genocide, and atrocity. A little depressing, I know, but it’s actually one of my favorite parts of managing the JFCS Holocaust Center’s social media profiles. Facebook, Twitter, and other apps can be a force for good when used as tools for community education and empowerment. I like to think that my curation of Holocaust- and genocide-related content brings historical knowledge and awareness of current events to our followers. But what happens when people use social media to cause harm?

This is precisely what is happening in Myanmar. Since last year more than 700,000 Rohingya have fled Myanmar, most to neighboring Bangladesh. Beginning in August 2017, the Burmese military, with assistance from civilians, initiated a wave of violence against Rohingya in Myanmar’s Rakhine State. The so-called “clearance operations” involved murder, rape, and the destruction of entire Rohingya villages. As a result, these atrocities have created the world’s fastest growing refugee crisis and many people around the globe – myself included – believe that the actions of the Burmese state and military constitute genocide. But what does social media have to do with any of this? 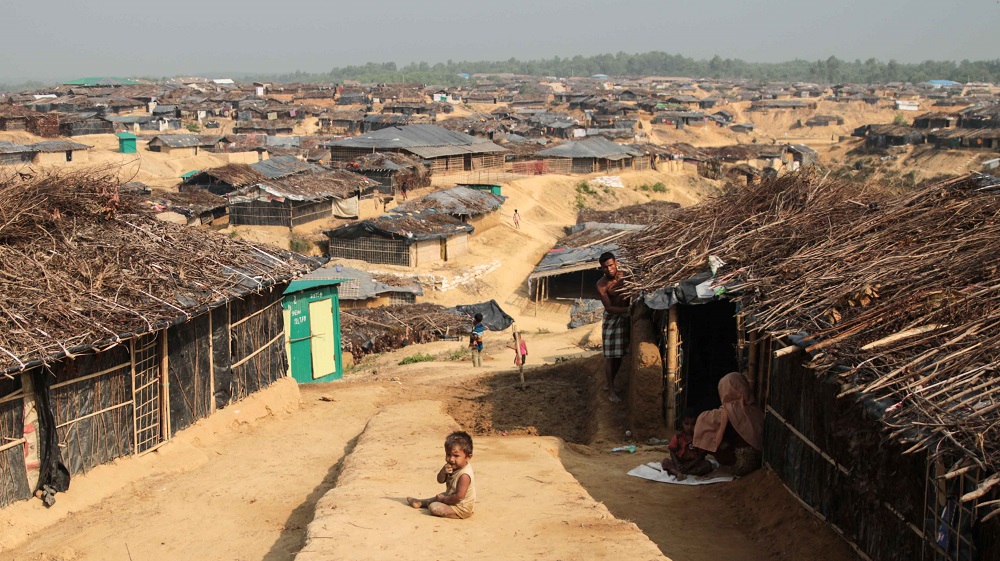 Kutupalong Refugee Camp in Bangladesh is home to over one million Rohingya refugees. Photo courtesy of Voice for America.

A Platform for Hate

Rumors, propaganda, and hate speech spread like wildfire after the introduction of social media in Myanmar. Regular folks, politicians, and influential Buddhist monks alike share dehumanizing posts that compare Rohingya to animals or incorrectly label them “illegal immigrants.” While the use of Facebook to spread hate and incite violence is a global phenomenon, in Myanmar its use by high-ranking generals in the Burmese military to inflame ethnic and religious tensions is something new.

“Set Fire to the Whole Country”

In its September 2018 report, the United Nations Fact-Finding Mission to Myanmar indicated that Burmese military officials not only used Facebook to spread propaganda about the Rohingya, but also to “check in” to and post pictures from the sites of massacres.[1] Thus, the posts by military leaders not only helped to incite violence against an already-marginalized population, but also placed state forces at the scene of several genocidal atrocities.

It is very likely that these posts will have serious consequences for the perpetrators of the Rohingya Genocide. During the Rwandan Genocide of 1994, hate-filled radio broadcasts spread anti-Tutsi propaganda throughout the country. At the international tribunal established after the atrocities, transcripts of the radio broadcasts were used to convict members of the media of inciting genocide.[2] One trial witness stated that, “What [a Rwandan radio station] did was almost to pour petrol, to spread petrol throughout the country little by little, so that one day it would be able to set fire to the whole country.”[3]

Like radio broadcasts in Rwanda, social media amplifies hate in Myanmar. Facebook continues to give bigots – including those at the top echelons of the country’s leadership – the opportunity to express their hatred to a wide audience. If, and when, the United Nations creates a tribunal to prosecute the leaders of the Burmese military on charges of genocide, I expect that their Facebook posts will be used as evidence to convict them.

When they eventually sit in the courtroom awaiting judgment, I suspect the perpetrators will be working out a strange calculation in their minds: What earns more “likes” on Facebook – hatred or remorse?

[1] Full report of the United Nations Fact-Finding Mission can be found here.

[2] Transcripts of radio broadcasts are available at https://www.concordia.ca/research/migs/resources/rwanda-radio-transcripts.html. Note that most transcripts are in French or Kinyarwanda, an official language of Rwanda.