Fall 2018 at the Jewish Community Library

We are excited to partner with the Jewish Community Library on two events this Fall! Both events are free and open to the public. 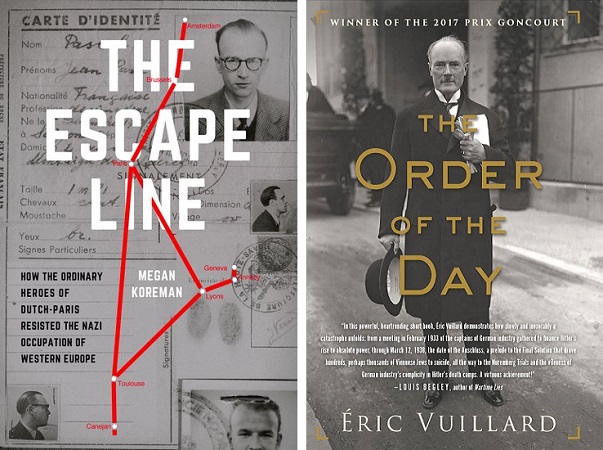 Hear from Megan Koreman, author of The Escape Line: How the Ordinary Heroes of Dutch-Paris Resisted the Nazi Occupation of Western Europe. From 1942 to 1944, the 330 men and women in the Dutch–Paris escape line rescued fifteen hundred Jews by hiding them in Belgium and France. They took another fifteen hundred Jews, resisters, and downed Allied airmen to safety in Switzerland and Spain and served as a courier service for resistance groups. They had little in common except for courage, a determination to rescue the persecuted, and enough ingenuity to figure out how to forge documents, smuggle people over borders, and pay for it all. Some of the line’s most active members were themselves Jews who ignored their own safety in order to help others.

Megan Koreman earned her doctorate in history at UC Berkeley. She has been fascinated by the Resistance since she was a little girl and first heard the stories about her aunt and uncle’s wartime illegal work in Maastricht.

RSVP to the October 3 Event >

The Order of the Day with Éric Vuillard

NOTE: This program will be presented primarily in French, with English translation.
Meet Éric Vuillard, award-winning author of The Order of the Day. This behind-the-scenes account of the manipulation, hubris, and greed that led to Nazi Germany’s annexation of Austria dismantles the myth of an effortless victory. Although the newsreels captured a motorized army on the move, in reality the Panzers broke down en masse on the roads into Austria. Éric Vuillard’s meticulously researched account of the Anschluss ultimately reveals a patchwork of minor flourishes of strength, fevered telephone calls, and vulgar threats.

Éric Vuillard, a writer and filmmaker, was born in Lyon in 1968. He has written nine award-winning titles, including Conquistadors, La Bataille d’Occident, and Congo. Vuillard won the 2017 Prix Goncourt, France’s most prestigious literary prize, for The Order of the Day which is being published by Other Press in an English translation by Mark Polizzotti this fall. Vuillard lives in Rennes, France.

RSVP to the November 7 Event >