The Police and the Holocaust: May 30-31, Guatemala City 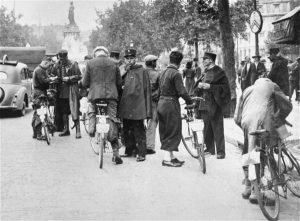 This conference brings together international scholars to address the role of the police in the Holocaust, particularly in the organized murder of Jews and Roma. JFCS Holocaust Center’s Associate Director Alexis Herr, PhD, will discuss her paper Perpetrators on the Periphery of Genocide: Italian Police during the Holocaust as part of Panel 1 on May 30 at 11:30 AM.

The Nazi state and their allies involved police at every stage of the genocidal process, from the arrest and looting of the victims to their deportation and killing. During Nazi occupation, non-German police units—some already in existence, some newly created—performed a range of key functions in pursuit of German goals, but also based on their own interests. Participants will address how and why the police—as an executive agency of the state as well as an organized group of decision-making individuals—took part in the genocidal process across Europe, and examine the extent of their participation in different countries and contexts.

This program is free and open to the public. Simultaneous translation between Spanish and English will be provided.