Join us on Holocaust Remembrance Day 2020 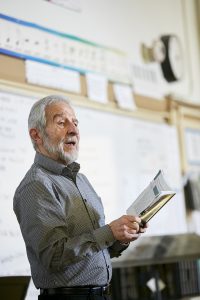 George Elbaum was 1 year old living in Warsaw when Germany invaded Poland in September 1939. His family lived in what became the Warsaw Ghetto, in cramped quarters and on starvation rations for three years.

Of his family of 12, only George and his mother survived.

Starting in 2010, George has spoken to thousands of students through the JFCS Holocaust Center’s William J. Lowenberg Speakers Bureau and recently completed his 250th talk. He is the author of Neither Yesterdays Nor Tomorrows and Yesterdays Revisited.