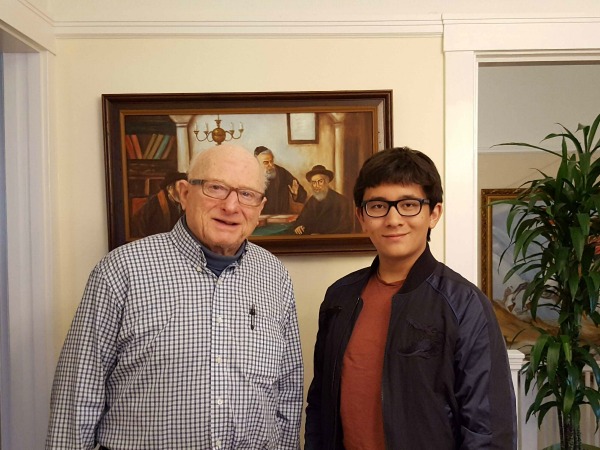 For many Jews in Czernowitz[1], the period preceding World War II was the golden age for Jewish civil rights. Leon R. was born during this period and enjoyed the benefits of being recognized as a citizen of Romania. As a young boy, Leon had a close friend named Marchel. He and Marchel were very similar, attending the same school, living in the same apartment complex, and sharing a passion for soccer. The difference between them, though, would end with Leon’s life being threatened many times over.

When Hitler’s hatred for the Jews permeated throughout Europe, many Jewish people had their lives threatened, Leon being no exception. In the fall of 1941, a ghetto[2] was ordered in the city of Czernowitz. On October 10, 1941, the ghetto was established and Leon and his mother and father were sent to live there with Leon’s aunt. Their stay in the ghetto would be very short-lived, however. In the winter of 1941, Leon’s family was sent to Transnistria[3] where they would surely die.

In desperation, Leon’s mother and aunt went to the Nazi headquarters to beg for mercy, knowing that it could end their lives. The man who met them was Captain Heizman. The captain had his own stakes in the war: his two sons. In order to secure their safety, Captain Heizman asked that Leon’s family pray that his two sons return home. The following night Leon and his family boarded a truck headed for a sugar factory in Djurin[4] where they would be able to work and survive the war. Sadly the factory had been closed and abandoned for years.

Three weeks after arriving in Djurin, Leon’s aunt died. In the ghetto, Leon’s family was starved and subject to great illness. Their living quarters involved sleeping in an old bed in a room with no insulation. The bed closest to the wall was always the coldest. Leon took this bed in order to protect his parents from the freezing temperatures of the outside world. This only source of water was the melted snow from the outside.

One night Leon’s mother hid his father and four others in the back of the house to keep them from being sent to work. A guard saw this and forced them out into the open where they would certainly be killed. Leon’s mother grabbed his father and dragged him inside their house. The guard burst in demanding that they hand him over and started beating Leon’s mother. In retaliation, Leon grabbed a knife and prepared himself to fight against the soldier. Before he was able to, his father was brought forward and was sent away for weeks before returning home alive.

After typhoid fever broke out, many were infected, including Leon and his mother. Leon was sent to die in the morgue. He was placed in a crib where he was deprived of food and drink for five days. The cold crept upon him and left him with no strength whatsoever. While in his crib his father passed by and Leon mustered enough strength to call for help. His father grabbed him and brought him home where he could recover. His mother was still in the hospital recovering from typhoid fever.

Two weeks after recovering, farmers took him out to the woods to gather wood for fire. He begged for food from people. He was given a pot of potatoes, freshly cooked pork, and bread. He took the bread home for his father, but he had to wade through the high snowfall back to the ghetto. In addition to the snow’s height, Leon faced greater challenges when he was intoxicated by his meal. After falling into the snow several times, he made it back home.

In the March of 1944, after being liberated by a partisan[5] group, Leon and his family left Djurin to return to Czernowitz. The journey lasted nine days and they walked the entire way. When they returned, Leon’s father was accused by the Russians of being a German spy for being a Jew and returning from a camp alive. Due to this, he was sent to Siberia for questioning. After nearly nine months of no contact, Leon’s father sent home a letter saying that he was being released and was returning.

After rerunning to Czernowitz, Leon and his family set out for Palestine. At the German border they were met by H.M. Forces, or British Armed Forces, and refused them entrance. Leon and his family were sent to numerous displaced persons camps[6], or DP camps, for four years. The first DP camp was called Hofgeisman in Germany. Here Leon spent nearly two years from 1946 to 1948. They were then moved to Kassel in the State of Hessen, a German state, for nine months. Next he spent time in Landsberg am Lech in Bavaria for many months. Before being allowed travel to the United States, Leon and his family were sent to another camp in Bavaria called Lagerlechfeld.

In February, 1951, Leon and his family were given permission to travel to the United States. After being sponsored by his aunt, they traveled by boat into New York on February 28th, 1951, three weeks before Leon’s twenty-first birthday. On this day, Leon says that he felt “born again”. Interestingly, instead of the German spelling of their name, the government misspelled it as “Rajninger”. Later that year in March, they traveled to San Francisco.

Once settled into San Francisco, Leon and his father worked at a steel company called Soule Steel, Co. while his mother owned a candy stand. They soon bought a house in San Francisco where Leon still lives. In many ways, Leon owes his life to the country that gave him a new beginning. His love for his new country made him want to give back by applying for the military and serving in the Korea. It was there that Leon was honorable discharged from the military.

[1] Czernowitz, formally a city in Romania, is a city in Ukraine. The Yivo Encyclopedia of Jews in Eastern Europe vol. 2. Ed. Gershon David Hundert. 311. Print.

[2] A ghetto is a part of a city separated from the city for Jews to live in.

[3] Transnistria was a land between Ukraine and Moldova; its name means “beyond the Dniester River”.

[4] Djurin was a ghetto in Transnistria.

[5] A partisan group is a group of people, usually ghetto escapees, who fought against German troops. https://www.ushmm.org/outreach/en/article.php?ModuleId=10007743

[6] A displaced persons camp is where people who have been displaced or moved by the war would go to try and return home. https://www.ushmm.org/research/research-in-collections/search-the-collections/bibliography/displaced-persons