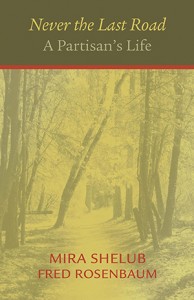 We are thrilled to announce the release of Never the Last Road: A Partisan’s Life by Mira Shelub and Fred Rosenbaum.

Mira Shelub is a partisan and a familiar face to many Bay Area students who have had the privilege of hearing her speak. Never the Last Road: A Partisan’s Life tells Mira’s miraculous story or resistance and survival during World War II.

Barely twenty years old, Mira escaped from a Nazi labor camp to join the Jewish Resistance in the forest. She fought back against radical evil and began a passionate love affair that would last a lifetime.

Published by Lehrhaus Judaica in partnership with Jewish Family and Children’s Services.