Students Nicolette K. and Frederick K. were matched with Holocaust survivor AnneMarie Y. during this year’s Next Chapter program. 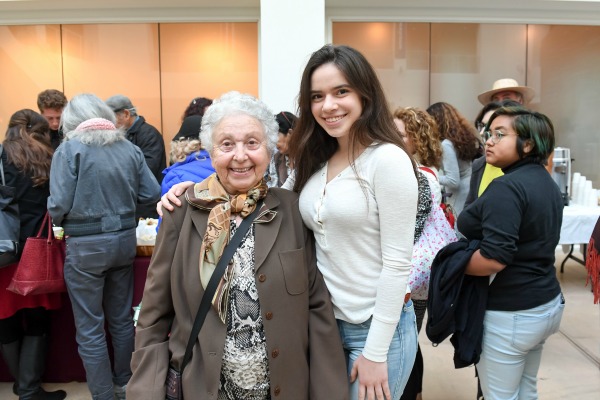 Nicolette and AnneMarie participated in the annual Yom HaShoah program at Jewish Community High School of the Bay. Nicolette first shared about some of AnneMarie’s experiences during the Holocaust with the students at her school, then interviewed AnneMarie on stage. After the program, Nicolette was awarded for her commitment to community outreach. Read Nicolette’s speech below:

I’m part of the Next Chapter Program, where students interview holocaust survivors and document their stories. I’ve had the privilege of working with AnneMarie and learning about her story. Since we are last generation that will get to hear first-hand testimonies of what occurred during the holocaust, I wanted share AnneMarie’s story with you all.

AnneMarie was born in Chemnitz, Germany. She lived a normal childhood until Hitler came into power in 1933. At first, her father said that they had nothing to worry about because they were German citizens, but Hitler didn’t care. It didn’t matter if you were German, Polish, French, or Russian; if you were a Jew, Hitler wanted you dead.

On November 9th 1938, Kristallnacht, the Gestapo showed up to AnneMarie’s house and took her father to a concentration camp, called Buchenwald. She was told that her father would only be released if they moved out of Germany. So AnneMarie’s family met a man who smuggled them across the border to Belgium in 1939. Shortly after, The Germans invaded Belgium, and AnneMarie would be forced to wear a yellow star, so Jews could be distinguished easier.

AnneMarie’s family fled again, this time to Dunkirk, France where British ships would move refugees to safety, but by the time her family arrived in Dunkirk, the Germans had already occupied it and sent her family back to Belgium. After they arrived back in Belgium, a resistance member took AnneMarie and 30 other Jewish children and hid them in a Catholic convent. One day the Nazis came to the convent to see if the nuns were hiding any British paratroopers there. Luckily, the nazis didn’t suspect any Jewish children hiding in the convent, but the nuns knew the Nazis would return again, so the children were relocated to a second convent, with far worse living conditions. There AnneMarie remained hidden until she was liberated in 1944 by Allied Forces. Much later in her life, AnneMarie found out that there were in fact British paratroopers hiding in the convent. 5 years later, AnneMarie moved to San Francisco and met her husband. One thing that stuck with me when interviewing AnneMarie was when she said that we must “forgive, but never forget”. I think we can all learn from AnneMarie’s story to be accepting of others.

As part of the Next Chapter, students write biographies of their survivors, then create personal projects to reflect on the experience of meeting and getting to know a Holocaust survivor. For his personal project, Frederick wrote a poem:

The Gathering
A reflective poem written by Frederick K.
Honoring the surviving story of AnneMarie
Inspired by AnneMarie’s reunion with her past classmates in the 1990s

A schedule of autonomous work
I awake to the feeling of my upset stomach,
No one said this should be done
No one.

It was then when I escaped over the water
Like an angel floating over the wakes back to God,
I’ve been living in Heaven with those blind to its beauty
I’m here, here, here I am.

Close the eyes, caressing my own hands
I feel the bones that keep me together,
In a flood of not-so distant memories
I simply remember.

The children, the fervor of the ladies
My ladies.
They were there, as was I
Not so long ago.

But now I’m here
Here with those who love me anew,
How can I reflect and remember
When things will never be the same?

I can look, ignore, continue to prosper
An idea so desirable to me,
I can choose to remember
In the comfort of a secluded life.

Yet, I gaze into the paper
Absorbed by sisters’ smiles,
Rejoice, my sisters, rejoice
For we are still alive.

A travel-circus, dancing in my head
Intuition sidles in,
A chemistry diverts my angst
This duty will be done.

I gather myself together
Around my home like beams of light,
I will go empathize with my sisters
For whom I joined long ago.

I traveled the wakes
They kept me above the ground,
But now the wakes must travel me
For I am now found.

Goodbye remorse, goodbye mask,
Hello Me,
For now I know that I finally am
The hurricane I’ve needed to be.