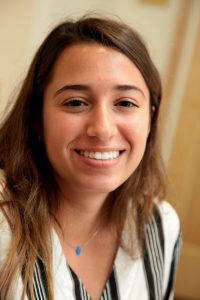 Gerda’s story begins in the German city of Breslau. She began her education at a well-regarded private Catholic school. The kids were friendly and she excelled in her classes. She could not understand why in 1934 the school asked her and other Jews to leave, or why her classmates turned against her. Amid growing antisemitism and an increasingly unstable political situation, Gerda transferred to a Jewish school. The height of hate and violence reached a climax on Gerda’s last day of formal education, at thirteen years old. On November 9, 1938 SS troops rushed into and wrecked her classroom, and murdered her teacher in front of the class. As Gerda ran home, the synagogue that towered next door was burning.

Before this, Gerda’s parents, Georg and Gertrude, remained optimistic, trying their best to shield her from the escalating chaos. Her father felt he was a German first and a Jew second. By the time Gerda’s parents sought visas, they were no longer being issued, and most countries were not accepting refugees. Gerda’s aunt in Switzerland sent them money to buy counterfeit visas to Bolivia since their own money had been confiscated. They were scheduled to leave in November 1939, but the voyage was cancelled several times. It was an especially harsh winter in Breslau, and there was no coal or food available.

In 1940, a Jewish aid organization helped Gerda’s family secure room on a ship leaving for South America; however, right before it left, they found out their reservation had been cancelled due to overbooking. That ship burned at sea. Soon after, they were able to find room on a ship leaving from Italy. On the 3 week long voyage, the only food that was available were sardines and olives. After docking in Chile, officials discovered their counterfeit visas and would not let them get off the ship. The Jewish aid organization helped them get released and from there, Gerda and her family took a train to La Paz, Bolivia.

The government said there were too many immigrants living in La Paz, so Gerda and her parents moved to a small native village, where the indigenous language, Quechua, was spoken, not Spanish. Gerda felt very lucky to find a job as a dentist’s assistant, while her parents opened up a small hotel.

Gerda was unhappy living in the Bolivian jungle, and at sixteen decided to move to the city of Cochabamba, where she learned Spanish and worked two jobs: at a candy store during the day, and at a restaurant in the evening.

Gerda got married, and after several years moved to Argentina. She did not have a visa, so she crossed illegally by jumping on a train to Buenos Aires. She worked in a photography studio and had her first daughter during the two years she lived in Argentina. Gerda was ready to move to the United States, and with the help of her parents, who had already moved there, moved to Los Angeles. Gerda continued her work as a photographer, starting by taking pictures of babies.

She was promoted to manager of the studio, and later to supervisor of the entire chain. After ten years in LA, Gerda moved to San Francisco to start a new life and marriage with her own successful photography business, which she ran for many years.

Gerda has been in the Bay Area for almost 60 years. Her two daughters were raised in San Francisco, and she now has 5 grandchildren, and 2 great grandchildren. Despite all of her obstacles, or perhaps because of them, Gerda has lived an extraordinarily vibrant and active life.