Students Caroline R. and Simone R. were matched with Holocaust survivor Herb H. during this year’s Next Chapter program. 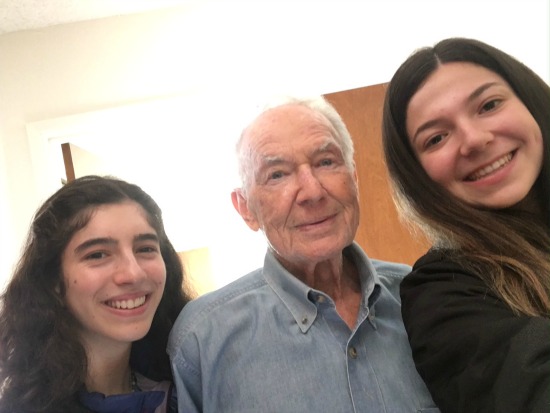 As part of the Next Chapter, students write biographies of their survivors, then create personal projects to reflect on the experience of meeting and getting to know a Holocaust survivor. For her personal project, Simone created a beautiful collage. View Simone’s personal project >

Herb H. was born in 1929, outside of Prague, Czechoslovakia. Herb spent five years in primary school, which he started in 1935. Fortuitously, he learned German. Although Herb’s father and mother were separated, he recalls that they were always on good terms. Herb loved escaping to the movies, and particularly enjoyed seeing Tarzan, Snow White and watching the newsreels. Just ten years later, Adolf Hitler and his German army occupied Czechoslovakia. Soon after the occupation, the Gestapo deported Herb, his brother and parents to Terezin, a transit camp. The ghetto had doctors, schools, and most importantly a sense of freedom. The camp was established as a propaganda camp to showcase the Nazis’ “fair” treatment of the Jews to the outside world. Two years later, his family boarded a nailed and bolted cattle car to Auschwitz. Upon arrival, Herb was examined by Dr. Mengele. As he approached the man in uniform, he flexed his muscles and in German, said “I can work”. Dr. Mengele sent Herb to the right; the left was the crematorium.

Fortunately, he was placed in the same barrack as his father but had to say goodbye to his mother and brother. He was only fifteen years old. Herb worked as a messenger for the first aid department, he delivered bandaids and aspirin. Herb was lucky with his job assignment as he was able to drink as much water as he desired at the clinic. Those in the camp were served only one meal a day, which was at night. Access to water kept him hydrated and alive. The day started at 6:00 a.m. with a trip outside to use the latrines. Then came lineup. The SS officers were brutal during this routine, the worse the weather was the longer they made the morning line up last. His father was soon after deported from Auschwitz and to this day, Herb is not sure where he was sent. In Herb’s words, “this was the first time I got really, really scared.”

One January morning, in 1945, the camp’s inhabitants marched out the gates they came in and embarked on a “march to nowhere,” widely known as the death march. Herb recalled seeing signs to Prague and realized he had gone full circle. On the third or fourth day Herb spotted a backpack and swiftly picked it up. Once inside the farmhouse in which they were sleeping for the night, Herb realized its contents were ones that could save his life: civilian clothing. As the group continued onward, Herb hid in the straw until he was alone. He put on the civilian clothing, which swallowed his emaciated body, and followed German workers to a train station. In a bid to make himself seem like a true German he called out “where are you mother?” so people would think he was looking for his relative on the train. As SS officers and dogs walked up and down the aisle of the train, Herb stayed still as a statue.
Herb arrived at their family friends’ house, the Crawls. The first thing he did was he took acid and rags to remove the tattooed number on his arm; he still bears the scar today. Herb slept for two days straight. Herb witnessed from inside as the Czechs tore the streets apart during the Czech Revolution in May of 1945. Finally, on May 9th the Russian army arrived, Herb was able to leave the apartment for the first time since his arrival, at that point he would have “welcomed the devil.”

After liberation, Herb made a daily trip to the Red Cross in search of his mother, father, and brother. In June of 1945 Herb was given the greatest gift: his mother. He still gets choked up when thinking about that moment. Herb and his mother began their journey to the United States in 1946. They arrived at the infamous Ellis Island, passed the required examinations, and were granted entry to the country, but allowed to bring only $10 with them each. From New York, the pair took a train then ferry to San Francisco where they took up residence with Herb’s aunt at 435 15th Avenue. Herb found a job as a stock boy in a shop similar to the Five and Dime; he worked for 80 cents an hour. His mother worked as a housekeeper. At night Herb went to night school and took classes such as English, mathematics, civics, and history; he spent five years in night school. From the job as a stock boy, Herb earned a position at a telephone company as an apprentice in repairs. In 1948 Herb walked into the training department at the Macy’s on Stockton and O’Farrell and became a stock boy at a $1.00/hour rate. He worked 60-80 hours weekly and saved his money wisely. After six months, Herb earned himself a promotion: he was now the Head of Stock. In addition to his full time job, Herb decided to join the Army Reserves. This decision benefitted Herb when it came time to apply for citizenship in 1952. Herb was granted citizenship by the judge instantaneously. Herb was then promoted to Junior Assistant; though it was a bigger title he actually earned less. Herb spent a total of ten years working for Macy’s before starting a business of his own, a baby store in the beautiful Marin County, California. While in New York while working for Macy’s on a buying trip, Herb’s friend gave him tickets to a Broadway show. Herb asked a girl named Annette, and though not very interested in him, she went anyways.

Evidently she loved the musical because they have been together ever since. Herb is now the father to three children and grandfather to ten grandchildren, and of course, loving owner to his beloved dog Duke.