Emma T. is an 11th grader at International High School and a participant in the JFCS Holocaust Center’s Next Chapter program this year. As part of the program, students are matched with local Holocaust survivors, who they meet with and interview several times over the course of a semester. 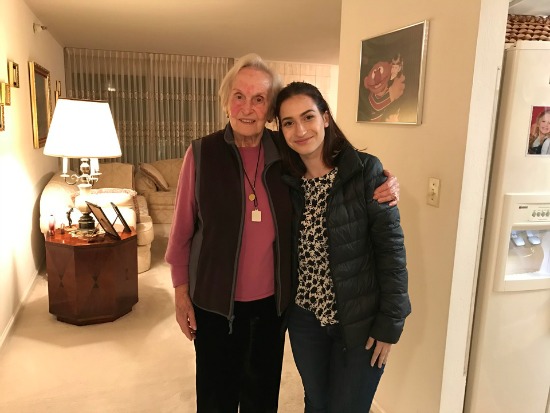 For her personal project, Emma wrote a poem entitled “The Puddle.”

Following meeting Livia G., I have met many things, including the importance of each individual’s story, rather than regarding the heart wrenching incident as the loss of one. Too often is the Holocaust regarded as a single loss, but each victim has an unique perspective and story which contributes to the story as a whole. In this poem, a puddle represents a collective, composed of the tears of the fallen. Although it is upsetting to reflect upon the size of the puddle, it is important still to reflect upon each drop which has composed this body of water. Each drop represents another victim who has fallen due to the heartless souls of the slaughterers, and each drop is composed of beauty, and individuality. Each drop deserves to be regarded and respected as an individual with a story, rather than just one of many who was lost, and has lost their individuality as a being with a name.

The running water drips, drips, drips
From a faucet distressed, rusted, and unkempt
Falling into a puddle of staggered drops: A collective bundle of tears
Only identifiable as one

But what about the many?
The tears of each who rose
The stories of those who fought
Until their frail bodies no longer could.

What about each fallen warrior,
each slaughtered child,
each murdered victim
by the hands of the greedy

What about the carbon they exhaled?
Contributing to the continuous cycle of life.
Their words of wisdom
no longer to be heard by mortals
only by their fellow angels

In each solemn tear,
The hydrogen is their distress
The O2 is their agony
The saline is their story
The whole is their name.

They have a name.
It’s not he, her, or they.
But Anne, Livia, or that by which you are called.

Not solely a number or tag
by which they are branded,
But rather a combustion of letters
to form a beautiful title.

Like you and me,
they breathed, they spoke, they cried.
They had a name,
And a right to be remembered.

And now all they have to be remembered by,
is this jagged puddle of water which we ponder upon
In which they are remembered as a pool of water
A drop of water no more.

When you see this puddle,
Think not of the saddening many,
but of each individual drop
In which you see your reflection.