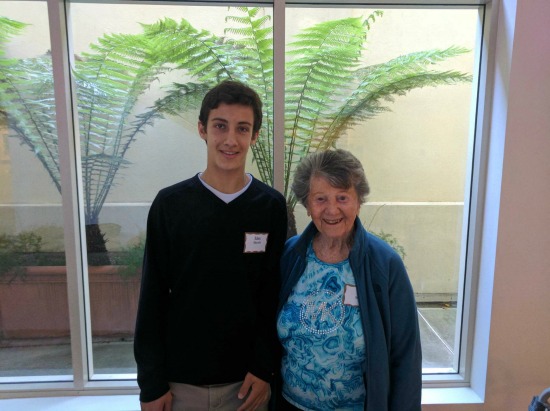 Lori S. was born in 1925 in Vienna Austria. Her father and mother were not very wealthy but also not poor. She grew up with a brother who was four years older, and two cousins. Her family owned a shop, with one employee. They lived in Vienna, which was then a center of culture in Europe. Before the war the Jewish population in Vienna could have been as high as 200,000, more than 10 percent of the city’s population. Jews were well integrated into society and culture, made up many of the city’s lawyers, doctors, and bankers and artists. Lori attended an all girls school, to which she walked every day with her friends. All in all, a normal life for a young teen in Vienna, in the 1930s. But in March 1938, Hitler invaded Austria and everything changed.

Lori described looking out of her bedroom window, and seeing tanks, rolling down the streets. She did not yet understand what was going on, and had to ask her mother what was happening. The next day she went to school like every other day, but when she arrived, and sat down in her normal place in the front of the class, the changes began. She was told to move to the back of the class, which puzzled her, as she had always sat in the front, that was her spot. All of the other Jewish girls were moved to the back as well, and of course it did not stop there. She was soon kicked out of school, and could not continue her learning. Her family began thinking about leaving in earnest around the time Kristallnacht happened.

On the nights of November 9th and 10th in Austria and Germany, riots broke out, and the shop windows of Jewish businesses were smashed. The riots were sparked by the assassination of a German embassy secretary, by a Polish Jew. The riots were the culmination of attacks on Jews following the Anschluss. Lori recalled her father being forced down on his knees to scrub the ground, and him coming home later laughing. That was the kind of man he was, always positive, and probably trying to be brave in front of his family, and show that he would not be affected by the Nazis’ threats. Lori’s mother was responsible for getting the family out of Vienna, and stayed last, to try and save anything she could. Her mother put an ad in a London newspaper, and a family responded, agreeing to keep Lori at their house. Her brother had plans to go to Palestine, and went to the Netherlands, while her father went to Shanghai with many of her relatives. Lori took the train from Vienna before taking a boat to London. She was sad to leave her family, not knowing if she would see them again. Lori’s new family was very kind, but London was a stressful experience for Lori. Not only was she in a new country where she did not speak the language, but London was being bombed by the Germans. She went to school with Stella the family’s daughter, a girl her own age in her new family, while Stella’s brother wanted to become a pilot and fight in the war. Lori learned English by having a pile of books placed in front of her to read.

At age 15, Lori left London on a military ship with 500 British troops (there were no longer passenger ships left by 1940) and arrived in New York to reunite with the rest of her family. Her mother had been in New York for some time, and had been working to pay for the remaining members of her family to join her. They lived in the East Bronx in an apartment on the fifth floor. Lori started high school soon after. She got a job arranging fake flowers. Lori graduated high school as a valedictorian, and eventually met and married her husband, a doctor with whom she later moved to California.