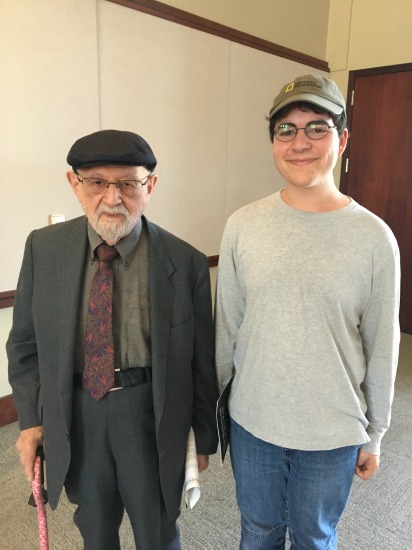 Louis D. was born in Amersfoort, The Netherlands, in 1929. He grew up in the nearby town of Arnhem. His parents operated an electrical store where they sold various appliances. Louis had one older sister. His parents were not particularly religious, but they believed that their children should be exposed to Jewish life. Louis and his sister attended Arnhem’s youth synagogue and participated in Jewish youth groups. They loved to swim at the local pool. Although the Netherlands did have its own Nazi Party (Nationaal-Socialistische Beweging), Louis did not experience much antisemitism in his early years. It would come primarily in the form of joking comments from other kids and good natured name calling. This all rapidly changed with the German invasion.

The Germans invaded the Netherlands on May 10th, 1940. Arnhem was situated fifteen miles from the German border. The town was occupied by ten in the morning. Louis awoke to the sound of dogfights overhead. His parents prepared the family to flee west towards the coast. They hoped to sail for safety in England, but the Dutch army had formed a defensive line between Arnhem and the coast. The family was forced to turn back. Louis’s parents feared returning to their home in the town center. They worried that the German soldiers, who had yet to encounter Dutch resistance, would get restless and begin to loot and pillage. Louis and his family were invited to stay with some acquaintances in a quieter part of town for the time being. The family’s son was to have had his bar mitzvah the following day. They were forced to dispose of all the liquor for the celebration in order to keep it from the Germans. On May 14th, four days into the invasion, the Dutch government surrendered following the bombing of Rotterdam. Louis’s family moved back into their house and began to adjust to life under occupation.

The first restrictions imposed upon Dutch Jewry by the Nazis came in November. Jews were forced out of civil service posts and universities. University students resented the dismissal of their Jewish professors and organized strikes and protests, eventually forcing the Germans to close the universities entirely. Those students went on to form the core of the Dutch resistance.

In 1941 Louis’s uncle was arrested by the Germans for his work with the resistance. Fortunately he was allowed a trial and a lawyer to represent him. He was actually acquitted and set free. Throughout the year, the Nazis imposed a series of restrictions upon Dutch Jews. The laws barred Jews from public places, forced Jewish children into segregated schools, mandated the wearing of a yellow star, imposed a curfew, and even forbid Jews to own bicycles and use telephones. As the restrictions tightened, Louis’s family made preparations to go into hiding. They arranged to hide with their neighbor while another neighbor hid their possessions. However, the arrangement fell through.

Fortunately Louis’s uncle, who was still active in the resistance, was able to arrange hiding places for the family. Louis’s parents were hidden in Amsterdam while Louis himself was sent to hide with a young couple in the port of Den Helder. The young couple was kind to Louis; however, he could never go outside in daylight for fear that he might be caught. The couple was completely unsure how to keep him entertained. Despite this, Louis’s time with them went well, until Louis was betrayed. The young couple, along with many of the port’s inhabitants, had been relocated by the Germans into prefabricated tin houses on the outskirts of town. The walls were very thin, and the neighbors could hear Louis next door. They reported him to the police.

Louis was arrested by the Dutch police; however, the police only went through the motions of the arrest to satisfy the neighbors’ suspicions. They had no intention of handing Louis over to the Germans. The officers told Louis that if he had a place to go, they would take him there. Louis was taken back to his parents in Amsterdam. He was then sent to hide with a family with three daughters. The family forced Louis to fold envelopes for extra income. Louis and the mother of the family did not get along, and he was never allowed to speak with the girls. Despite his unhappiness, the mother made Louis write letters to his parents describing how well he was being treated and how happy he was. One night while the the parents were out, Louis went and talked to the girls. He asked them about how their school was and about their lives. When the mother discovered this, she was furious. She went immediately to Louis’s parents in Amsterdam and told them that there had been a fight. She asked Louis’s father to come and talk some sense into him. Louis’s father was suspicious. If the letters they had been receiving were true, why would there suddenly have been a fight? When he got there Louis begged him to take him back to Amsterdam. His father agreed.

During the next several months Louis spent short periods of time hiding with different families. Eventually he was sent to Friesland, a province in the north of the country, were it was far safer for hidden Jews. There he was hidden with a prominent resistance family. The father was the town clerk and had helped to forge papers for the resistance. He had arranged for many Jews to be hidden throughout the region. They treated Louis as part of the family. The father began to make arrangements for Louis’s sister to be brought to hide in Friesland. He traveled to Amsterdam to make preparations and was to return in a few weeks when he had a hiding spot for her. Then on April 8th, 1944 Louis’s parents and sister were arrested by the Germans and sent to Westerbork. On May 19th, they were deported to Auschwitz.

Louis hid with the family in Friesland until the end of the war. They were often on the run from the Germans for their resistance activities. On April 18th, 1945, Louis was awoken in the early dawn and rushed to the town church were Canadian soldiers were gathered. The Netherlands had been liberated.

Louis continued to live with the family through 1946. In 1948, he went to Israel to fight with the Haganah. He returned to the Netherlands the following year. The nation had been devastated by the war and the economy was still struggling. Opportunity was scarce so Louis arranged to emigrate to the U.S. He arrived in New York in 1950 where he worked a number of small jobs. During the Korean War, Louis was drafted into the U.S. army and sent to the West German city of Idar-Oberstein to serve as an interpreter. He enjoyed surveying the destruction visited upon the Germans and having authority over them as an occupying soldier. When he was discharged, Louis attended university in the US and the Netherlands. He married, and worked for IBM vetting ideas for inventions for their practical applications. He moved to California in 1977.