Students Eloise M. and Ari N. were matched with Holocaust survivor Sonia K. during this year’s Next Chapter program. 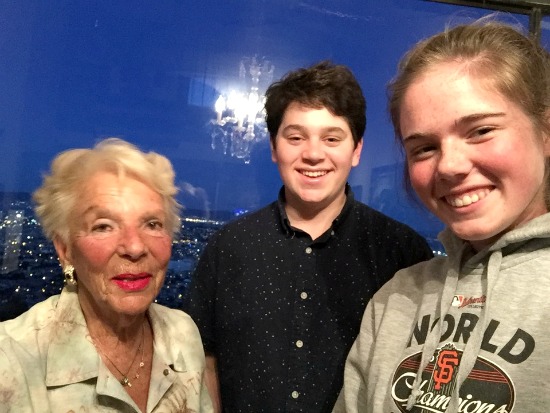 As part of the Next Chapter, students write biographies of their survivors, then create personal projects to reflect on the experience of meeting and getting to know a Holocaust survivor. For her personal project, Eloise created a piece of art. 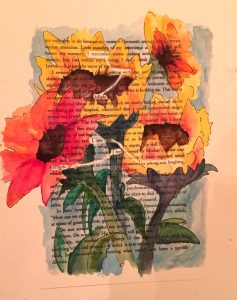 For my personal project I chose to use what Sonia has done to memorialize her story and add to it what I have learned from her story. This is a photo-copied page from Sonia’s book, Sonia’s Song, which documents her life story from birth to present. It is a sad, yet beautiful story that illuminates what it was like to be a child during the Holocaust. I wanted to alter her story to show more of what she has taught and showed me through her mentality today. I drew colorful flowers, meant to representing Sonia’s vibrant and lively attitude. The paint is meant to cover up all of the words except those that seem to me what Sonia is now. Through all that she has gone to, I can see that Sonia does have fond memories, she has and always will be strong, and has learned through all of her hardship that she can still be loving and be continuously optimistic. These are the lessons that Sonia has taught me and that I hope to present through my project.

Sonia Korn-Grimani was born in Germany in 1933, the year Hitler rose to power. She lived in a large apartment with her father, mother, and brother Henri until she was five years old. Her father held a German passport and her mother held a Polish passport. After hearing news of the Nazis beginning to strike terror in 1939,[1] her father abandoned his family and escaped to Germany after his passport had been suspended because he was Jewish. Nobody knew where he had escaped to, or even if he was alive. One day in 1939, her mother received a document from the German government declaring Sonia and Henri enemies of Germany.[2]

After reading this, Sonia’s mother told her and Henri to pack a small bag because they would be leaving at 5pm that night. Sonia was confused as she was still very young. At five that night, a car pulled in front of their home and Sonia said goodbye to her mother. Her mother told her to listen to the driver and do what she was told. Sonia and Henri were put into the back of a truck, hiding under layers of blankets. The driver was a man, but there was a woman in the passenger seat. These were “resistance smugglers” who had received a hefty payment from Sonia’s mother in order to safely drive them to the German-Belgian border.

After several hours, the truck stopped and the smugglers told them to leave. Sonia and Henri were instructed to walk along the train tracks ahead of them until they reached the end. Then the car pulled away. Completely alone, seven-year old Sonia and nine-year old Henri stumbled along the tracks under the light of the moon. They didn’t know where they were, where they were going, or why they were doing this. Sonia believes it’s a miracle that they weren’t shot by a German officer along the way. After a long night of walking, Sonia spots an officer approaching them in the distance. She doesn’t know what country the officer was from. Was he going to kill them or save them?

As they draw closer, the officer says, “Welcome Children” in French. Sonia hugs the officer and begins to cry. They had reached Belgium.[3] She was starving, tired, confused, and scared. The officer gave them a place to sleep for the night. Still confused, but absolutely exhausted, Sonia and Henri flopped down and slept until 11am the next morning. When they woke, a big breakfast of bacon, eggs, and toast was served to them. Although Jews aren’t supposed to eat bacon, they ate it anyway. In the morning, the officer told Sonia that they knew where her father was. Sonia and her brother were then driven to their father who had successfully escaped to Brussels[4]. The three of them stayed in a one-bedroom apartment and shared a bed. During this time, neither Sonia nor her father knew the status of their mother back home. Then one day, Sonia’s father told Sonia and Henri to follow him home. When they arrived, they saw their mother asleep in the bed of their apartment. She had made the same trek they had made and she was so proud of them. She couldn’t believe they made it all by themselves. They were all together again.

While in Brussels, Sonia and Henri attend a Dutch Flemish school, but only for a few months because they received news that the Germans were planning to invade Brussels. After hearing this, Sonia’s father decided to rent a van and drive to France for safety. They and another family spent days in the van and eventually stopped at a roadside farm to ask if they could take showers and eat food. Sonia’s mom begged while her father was hiding in the van.[5] The woman refused after accusing them of being fifth columnists.[6] However, a nearby officer heard Sonia’s mother speaking German.[7] The officer began to question them because Germans running away from Germany was suspicious at the time. Thinking quickly, Sonia’s mother proclaimed that she was a German language teacher who taught in Brussels and was worried about the impending attack. The officer, who was himself a German commander, believed her story and said to her: “We are about to take over all of France and it won’t be safe for you here. I have a friend who is heading into Brussels tomorrow and he would be happy to bring your family with him.” Sonia’s mother agreed and early the next morning, an S.S.[8] guard arrived to feed and drive Sonia’s family back to Belgium. The officer couldn’t drive them into Brussels because German guards were not supposed to be taking care of refugees. After this risky drive, Sonia’s family found their way back to the same apartment they had stayed in before.

A few months later, the news of an impending round-up began and they decided to split up. The children were taken to a “safe house”[9] with the hope of being accepted. When they arrived, they were turned down because the leader of the house was already hiding and taking care of twenty-two other Jewish children. Sonia’s mother fell to her knees and began to beg. And it wasn’t until she offered more money, that her children were allowed in. Sonia and Henri said goodbye to their mother once again, and spent the next two years in this house working as “Little Jewish Slaves.” They peeled potatoes all day, were fed oatmeal and parsnips, and were ill-treated. The woman in charge was actually very anti-Semitic. She was in a hard position though, because if she had allowed everyone in, she would be putting her and her hideaways at a higher risk of being found. Sonia’s mother would visit every few months, but they never saw their father once in these two years. In June 1944, a neighbor came to the house and told all of the children to follow her outside and down the street. The woman in charge was hesitant, but eventually allowed them to follow her. When Sonia saw the scene in front of her eyes, she burst into tears full of all kinds of emotions, but especially happiness. The Americans had made it. She knew they were American soldiers because she saw a black soldier and she had never seen a black man before in her life. Also, one soldier was wearing the star of David, a shocking but reassuring and comforting sight for Sonia. After D-Day[10] and the liberation, her parents couldn’t pick her up immediately because they had nowhere to live. A few months later, her mother finally came to the house and took Sonia and Henri home to Brussels. Sonia later found out that her father had left the house because he couldn’t stand being inside anymore. He went for a walk around Brussels and German soldiers identified him as a Jew and immediately sent him on a death train to Auschwitz[11]. Miraculously, he was able to jump off the train[12] and he was picked up by the resistance. He suffered a broken leg, but no soldier shot at him when he jumped. Later, her family decided to drive to Paris because Sonia had always wanted to live there. When they arrived, they received a letter from the Belgian government telling them to return to their original home in Germany. Sonia’s mother and father refused to ever live in Germany again, making them stateless. Because of their status in Europe, they decided to set off for Australia.

[1] The invasion of Poland occurred on September 1, 1939. This was the beginning of the Germany’s participation in World War II.

[2] While telling us this, Sonia said: “Wow, we had a big responsibility”

[3] A temporary “safe place” for Jews as the Nazis had not yet invaded Belgium.

[4] The capital of Belgium.

[5] Because Jewish men are easy to identify, Sonia’s father had to hide.

[6] A fifth columnist is a group/person within a country at war, who is/are sympathetic to or working for its enemies. Essentially, they were considered underminers.

[7] Sonia’s family only knew how to speak German and Yiddish.

[8] S.S.: The Schutzstaffel was a major paramilitary organization under Adolf Hitler and the National Socialist German Workers’ Party Nazi Germany.

[9] Running a “safe house” was extremely risky because if the Nazis found out during on of their routine checks, you and the hidden children would likely be sent to concentration camps, or killed on the spot.

[11] Auschwitz was the largest Nazi concentration camp. Often called “The Death Camp”, it was located in Oświęcim, Poland. This camp is infamous for it’s sign at the entrance: Arbeit Macht Frei. This means: “Work sets you free.”

[12] This was an extremely rare feat and Sonia considered this a miracle.