Overlooked but Not Forgotten

The Voices of Women in the Holocaust

“Respond to hate with love… it is the only thing that works” –Helen Farkas, z”l [1]

Why does it continue to be important to teach young women about great women in history? As Gershon Bacon reminds us, there is a “persistent tendency to assume the male experience is the universal one.”[2] This was a relevant point in 1999, and remains so today. I was reminded of Bacon’s words a few weeks ago when millions of people stood together on January 20th at women’s marches in cities worldwide. One woman in particular was very inspired to join the march, but due to her health was unable to join. Despite not being able to stand alongside the marchers, she still made a poster which read, “I survived Auschwitz for this?” and participated virtually. 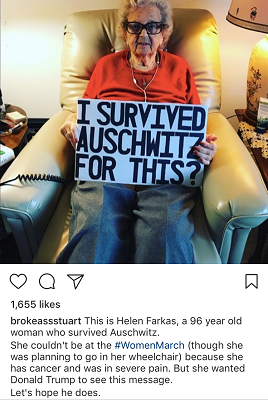 That woman was Helen Farkas z”l. Helen passed away on January 29th at the age of 97. She was a mother, grandmother, sister, wife and great mentor of mine. In 1974 she was a pioneer in Holocaust education when she began sharing her story of surviving the Holocaust. Her testimony broke the mold of Holocaust education, which at that time was taught almost exclusively by male historians whose research focused on the male experience.

Although the “Final Solution,” the Nazi plan to annihilate all Jews, targeted all Jews irrespective of their gender, men and women experienced the Holocaust differently.[3] And yet, for decades Holocaust scholars failed to acknowledge that a woman’s experience of genocide was informed by her sex. A woman’s role as the primary care givers of children along with her biological makeup distinguished her experiences from those of men. From the moment they arrived at a concentration camp, for example, women were treated differently.

Women with children were often the first to be sent to their death. Pregnancy was a death sentence in the concentration camp environment, and upon arrival most women holding young children were immediately selected for death to avoid the chaos of separating a mother from her children. Upon arrival, mothers were encouraged by the prisoners unloading the trains to give their children to their elderly mothers if they wished to have a chance at survival. As a mother myself, this feels like an impossible situation because biology trains us to protect our children above all else. 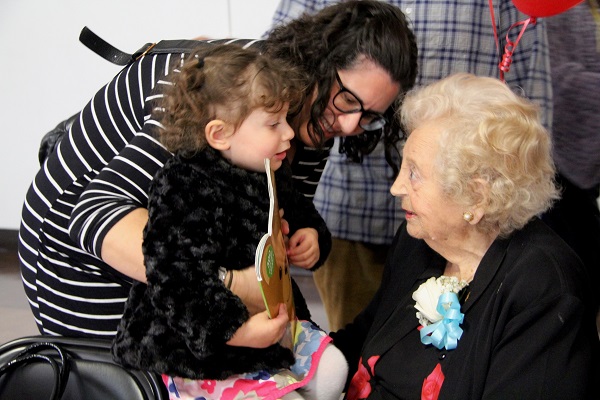 Helen Farkas z”l together with Morgan Blum Schneider and her daughter Micah.

We owe our knowledge of female experiences of the Holocaust to the survivors who gave testimony and shared their stories. Helen led the way, sharing her firsthand experience with students throughout Northern California. Today the field of Holocaust studies has evolved and there are more female academics and more books about women during the Holocaust, which creates greater opportunities to teach students about this important topic.

To this point, JFCS Holocaust Center staff commemorated the 12th International Holocaust Remembrance Day on January 27th by running an educational program focused on female experiences. Together with my colleagues, we taught more than 200 young women at Mercy High School, San Francisco about courageous women in the Holocaust. We included the stories of women at Auschwitz who smuggled in gunpowder from their work detail to blow up a crematorium; resistance fighter Hannah Senesh who parachuted into Nazi occupied Europe to warn her fellow Jews; and Rywka Lipszyc a 14 year old diarist in the Lodz Ghetto whose words continue to inspire us today.

Looking back on my decades of studying and teaching about the Holocaust, I still find the testimonies of the female survivors to be my greatest source of knowledge on women and the Holocaust. For this reason, I have included some of my favorite works about women during the Holocaust in the list that follows.

[1] z”l is the symbol in Judaism for of blessed memory. It is traditionally used when naming and speaking of the deceased.