Hope for the Future

Simone R. is a 10th grade student at The College Preparatory School and a participant in the JFCS Holocaust Center’s Next Chapter program this year. As part of the program, students are matched with local Holocaust survivors, who they meet with and interview several times over the course of a semester.

For Simone’s personal project, she created a beautiful collage. Continue reading to learn more about the project in Simone’s own words. 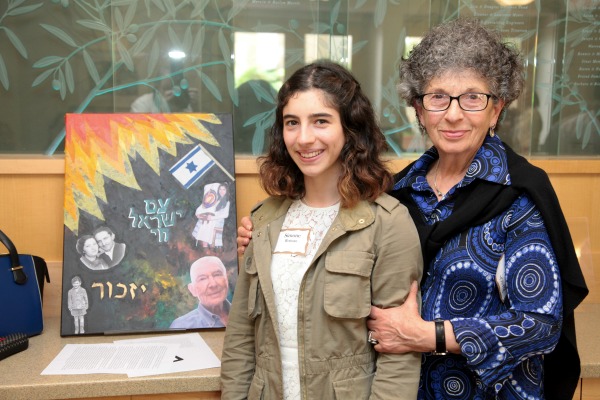 Simone and her grandmother at the Next Chapter graduation

In my project, I reflected on the Hebrew phrases Am Yisrael Chai and Yizkor. Am Yisrael Chai means “the nation of Israel lives” and Yizkor means, “remember.” The main question I explored was, how do we deal with both tragedy and hope within ourselves, as humans, and also in the history of the Jewish people?

The Holocaust survivor I have had the privilege to meet and speak with this year, Herb H., taught me how this is possible. Herb lived through unimaginable experiences during the Holocaust. After he described what he went through, it seems unbelievable to me that he could still smile, tell hilarious jokes, and raise a family. One thing he said to me that especially stood out was, “I came to the United States with only ten dollars. Now I am rich – I have my wife, three daughters, ten grandkids, and Duke (Herb’s dog.)”

Just because Herb is currently grateful and happy, it doesn’t mean that he forgot his past. It still remains a part of who he is. The contrast between his horrific past and his current positive outlook on life leaves me awestruck and inspired. It also helps me understand Jewish history, and my own identity as a Jew. Even though Herb does not consider himself religious, the phrase “Am Yisrael Chai” still came to my mind while thinking about our meetings.

On the very first Next Chapter meeting, all the students got into pairs and each pair learned about a different era in Jewish History. After collaborating on a timeline of Jewish history, we were asked to summarize it in one word. At first, we said things like “destruction,” “persecution,” and “antisemitism.” After further discussion, however, we came up with words like, “resilience,” and “strength.” The group realized that the Jews were persecuted, but the concept of the Jewish people, still lived on. Even though the religion and the people part of the religion change every generation, the powerful unity and resilience in holding onto the Jewish identity lives on.

It’s important to not only acknowledge those who lived through the destruction (Am Yisrael Chai – The Nation of Israel Lives) but also remember those who were lost (Yizkor – Remember). These two concepts must always be hand in hand, because without one, there is no other. Both shape a person’s and peoples’ identity.

My family holds onto both Am Yisrael Chai and Yiskor while dealing with our own history. My biological great grandfather, Martin, was killed by the Nazis before my grandma, Bianca, was old enough to know him. My non-biological great grandfather Simon, survived the Holocaust but lost his first wife and his child, who was five years old. Neither my mom nor my grandma know the child’s or wife’s names, but we still remember and memorialize them.

When I was in first grade, I received my first Sidur, a Jewish prayer book. My parents filled the inside cover with pictures of previous generations in my family. Glued onto the corner of the left inside cover was a photograph of Simon’s little boy, looking only a bit younger than I was when I received the Sidur. Here I was, holding the Sidur I would pray with for years and years in the future, when the boy in the photo never even lived to be the same age as me. How can I hold both this unthinkable loss and incredible gratitude and happiness within me? Won’t the tragedy make the happiness less happy? Won’t the happiness make the tragedy less sad? 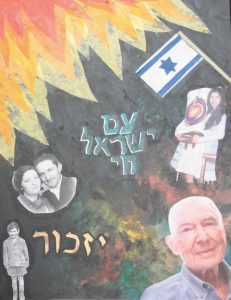 In this collage, I used different symbols and photos to explore the theme of Am Yisrael Chai and Yizkor, hope and remembering destruction. In the top left corner, I put a fire to symbolize the antisemitism and hate towards Jews throughout time. Instead of choosing a specific instance and labeling the perpetrator, I used a generic fire to show that hate is hate, no matter what form it takes on. Lower than the fire, on the left side and left corner are pictures of Martin and Simon’s son, the word “Yizkor” in between them. My family remembers them and we hold them as a powerful part of our identity. In contrast to the death and tragedy on the left side, I put a photo from my bat mitzvah and an Israeli flag on the right. My bat mitzvah is proof that the Jewish nation, Am Yisrael lives on, even after the Holocaust and countless other tragedies in our past. My Bat Mitzvah was joyous and hopeful, as I officially became a member of Am Yisrael. To me, Israel itself is rich with hope. Us Jews finally have a place where our Jewish identity can thrive and grow to its potential. And finally, surrounded by an explosion of color, Herb smiles in the right bottom corner of the canvas. I tried my best to represent Herb’s colorful and open hearted personality. The purpose of this collage is to portray the Jewish, as well as human quality of holding both the terrible tragedies of our past with the happiness of the present, and hope for the future.