The JFCS Holocaust Center hosted its first ever Spanish workshop this summer. Claudia Leiva, adjunct faculty at Santa Rosa Junior College, attended the first session of our virtual Summer Book Club, spearheaded by Leslie White. Leon Leyson’s The Boy on the Wooden Box, the focus of that first session, resonated with Claudia, who wanted to bring this story and Holocaust history to her students—in Spanish. 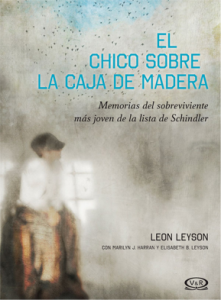 The Boy on the Wooden Box Spanish Edition

Claudia reached out to the Holocaust Center in the hopes that Leyson’s text would be available in Spanish for her students to read.  Scanning the entire book herself, Claudia assigned the Holocaust survivor’s book to her students. At the end of July, Leslie White and Penny Savryn led an evening workshop on Zoom for Claudia’s students. Students created an identity chart—one activity used to humanize those murdered during the Holocaust and individualize statistics.  White would give historical context to Leyson’s text and Savryn would translate into Spanish, facilitating conversation.

“Your enthusiasm and passion for the work you do through JFCS Holocaust Center is so palpable and contagious,” wrote Claudia after the workshop. “[My students] are curious and want to continue to read more books about the history of the Holocaust and learn about the heroic experiences of survivors.”

Veronica, one student at the workshop, said that this talk opened her mind and gave her a different perspective to understand others’ experience.

The Book Club engaged over 500 people this summer.  In June, attendees took a virtual tour of The Annex of the Anne Frank House and the Rywka’s Diary exhibit at the Galicia Jewish Museum in Poland. The Summer Learning Series is a program of the JFCS Preisler Shorenstein Institute for Holocaust Education. Simon Preisler, z”l, father of Lydia Shorenstein and Renee Barasch, was born in Fancsicovo, Czechoslovakia in 1925.  A survivor of Auschwitz, he settled in Germany, where he had a successful career in business after the Holocaust. Mr. Preisler was a leader of the Frankfurt Jewish community and a well-known philanthropist.  His courage and wisdom serve as a reminder of the strength of the human spirit in the face of hatred and indifference. Mr. Preisler passed away in 2005.

The JFCS Preisler Shorenstein Institute for Holocaust Education is proud to offer a new student seminar this Fall.  Click here to learn more about Pages & Stages: The Holocaust in Literature and Film >