The Story of AnneMarie Y. 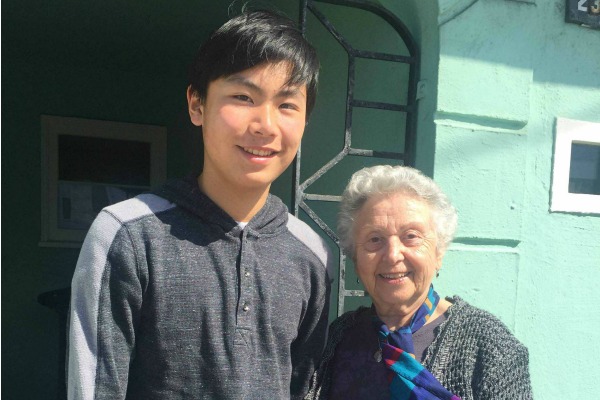 AnneMarie Y. was born in Chemnitz, Germany, She lived in a house with her father and mother. On November 9, 1938, when AnneMarie was a young child, she heard the violence of Kristallnacht[1] from inside her house. When she asked her parents what was going on, they lied, saying to her that some people must be having a party. However, AnneMarie knew something was wrong because of her parents’ reaction to the noise. In her life, she had never experienced antisemitism, but she suddenly became exposed to an extreme form of it that night. Later that day, the Gestapo barged in the house, took her father away, and transported him to Buchenwald[2], where all the men in the town were being moved to. Luckily, he was released about 6 months later, in April 1939, because AnneMarie’s mother decided to travel to Belgium. They had heard that they could be let in at the border. AnnieMarie remembers her father wondering how human beings could mistreat others like that. He was in the camp before the war, so the Germans were not trying to kill them. However, the prisoners in the camp were heavily mistreated and beaten. AnneMarie’s father witnessed a rabbi who was receiving the worst treatment of all, being constantly harassed by the Germans.

AnneMarie left Germany with her family in September of 1939 and moved to Brussels, Belgium. She and her parents got settled into a home and she went back to school, forced to start a new life in a new place. Her problems intensified when the Germans invaded Belgium[3]. Though she was just a child, AnneMarie remembers that the Germans invaded quickly and without resistance. She remembers that one minute they were not there, and the next minute soldiers and trucks were stationed on the streets all over the land. Soon after, the Germans forced all Jews to wear the yellow Star of David. They also issued new IDs to every Jew with a red J stamped on the front. They added “Israel” to the middle of every Jewish man’s name and “Sarah” to the middle of every Jewish woman’s name to further identify them. This greatly troubled AnneMarie, because she didn’t enjoy being singled out and having her background shown to everyone in sight. Her family decided to travel to Dunkirk, France, a port where British ships moved refugees to safety. Their only option was to walk, and along the way, both the Germans and the British carried out bombings in the street. AnneMarie, who was about 10 years old at the time, remembered seeing debris, serious damage, and injured or dead bodies lying on the ground. Unfortunately, by the time they got to Dunkirk, the Germans captured the city, and they were forced back to Brussels.

While in Brussels again, a young student at the University of Brussels, who worked with the resistance, approached AnneMarie’s family. She worked with them and moved AnneMarie, with about 30 other children, to a Catholic convent, where they could hide. AnneMarie was separated from her family, and she was scared and confused. She didn’t understand the danger she was in at the time. While she was in the convent, AnneMarie found out that her mother had had a stroke, so she traveled to visit her. Her mother was cared for in her house, and a doctor visited her, but they weren’t able to do much. She eventually died in February of 1945. Because of German laws and because she was a Jew, she wasn’t allowed into hospitals, and therefore she had a low chance of survival.

One day, German soldiers came to the convent where AnneMarie was staying, looking for an English parachutist hidden in the convent. They eventually left, but after that event, the children were all moved away because the convent was no longer safe. The Mother Superior[4] knew that eventually the Germans would discover the truth. AnneMarie was placed in a Reform School, where she had a horrible experience. Luckily, on September 4, 1944, they were liberated by Allied Forces. AnneMarie remembers seeing British cars and soldiers marching, and she was so happy that she was liberated and that she wasn’t forced to wear the star anymore. She was reunited with her parents, and in April of 1945, two months after her mother’s death, the war ended. From Brussels AnneMarie traveled alone to England, then New York, and then San Francisco, where she started to live. AnneMarie arrived on May 15, 1947. Her father traveled there himself two years later to live with her. In 1969, AnneMarie visited the convent where she stayed as a child with her daughter. In 1991, she attended an International Reunion of all the Hidden Children[5] during the Holocaust. To this day, AnneMarie continues to speak at different schools, spreading her story and her message. She values her service, and she believes it is important to speak to young students. “We must forgive, but not forget,” she says. The Germans in the modern world are nothing like the Germans during the war, so we must forgive them. However, we can never forget, or it could happen again. Today, there are groups that discriminate against others and kill for almost no reason. The world must learn from the Holocaust and prevent that part of history from repeating itself. People all around the world need to realize that no one deserves to be discriminated against, and they must take action to keep the world safe.

[1] Kristallnacht was a major event that sparked the Holocaust. Members of the SA and the Hitler Youth destroyed synagogues, looted Jewish business, and desecrated cemeteries. After this event, laws were passed that deprived Jews of property and rights.

[2] Buchenwald, which was built in 1937, was one of the largest concentration camps. It was located about 5 miles northwest of the city Weimar. At first it was only for male prisoners, mostly political prisoners, but women were brought there 6 or 7 years later. http://www.ushmm.org/wlc/en/article.php?Moduleld=10005198. Accessed on 12/28/15

[3] Before the invasion, Belgium had a Jewish population of about 66,000, and only 10% of those Jews were actually citizens. Belgium was conquered by Germany in May, 1940. The government was forced out and they fled to Great Britain. The Germans started enforcing anti-Jewish laws, forced Jews to build factories and forts for the war effort, and issued the yellow Star of David. “Belgium.” Encyclopedia of the Holocaust. Ed. Israel Gutman. 160-161. Print.

[4] Term used in the convent to describe the woman who was in charge.

[5] During the Holocaust, the mortality rate for children was less than the rate for adults. In order to survive, many children were hidden, facing constant fear, danger, and problems. Many were sent to live with Christians, hidden in attics or cellars, or given false papers to hide their identity. http://www.ushmm.org/research/research-in-collections/search-the-collections/bibliography/hidden-children#h131. Accessed on 12/28/15