The Story of Bill K. 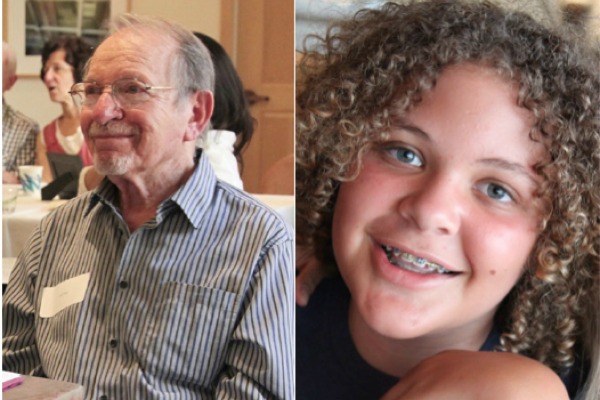 Shlomo Katz, now named Wilfred (Bill) K., was born in the year 1928 in Pultusk, Poland[1]. He was the 3rd oldest of 7 children. Born and raised as a Jew, Shlomo’s life was enjoyable, school in the fall, winter and spring, and a break to play in Pultusk’s scenic river and forests. Eleven year old Shlomo lived a normal life, until September 1st, 1939, when the Germans invaded Poland. German antisemitism was well known at the time, so the Katz family decided to move to the more heavily defended Warsaw. They walked along the road, with their most valuable things on them, along with other fleeing refugees and retreating Polish fighters. They stopped for the night in Wyszkow, a small town 34 miles away from Warsaw, where they slept in a synagogue with other refugees. The next morning the Germans had arrived.

The people sleeping in the synagogue were awakened to the fact that the roof was on fire, so they all ran out of the synagogue. Outside of the synagogue were German soldiers who captured them all. They were forced to march back down the road. They marched all day until the group reached a farm, where the men got in one farm and the women and children got in the other (all of Shlomo’s siblings were still considered children). The next day, all of the men were gone, including his father.

The next morning the women and children continued the march. They were told to stop in a small valley  where everyone thought they were going to be killed. However a high-ranking German officer came and told them they were free to go back to their towns. While they were not allowed to go closer to the front (Warsaw), this was a shocking act of mercy for the time. The family, lacking their father, returned to Pultusk. There they lived for the next few weeks, but the Germans would not relent. On September 27, every Jew in the town was rounded up and forced into the central park. In the park, they filed through a building where they were told to give up their valuables and leave Pultusk. They had nothing but the clothes on their backs, everything else of value was taken by the Germans.

By then the Russians had occupied the eastern half of Poland, which the Germans allowed to them in the Molotov-Ribbentrop[2] pact which secretly partitioned Poland. The Russians had a more lenient policy towards Jews than the Germans, so many families, including Shlomo’s, decided to make for the border. The trek was 200 miles, and it took the family over a month to get there. Finally, they reached the border (which was made by connecting rivers) and got a farmer to take them across in a boat. However, the border had just been closed due to excessive immigration to escape the Nazis, so a border patrol officer had the farmer take them right back. Shlomo’s mother then took the children to a border crossing, where they were blocked. This happened again until she started to beg at the 3rd crossing. She justly said that the little children wouldn’t survive many late October nights, and that they needed to get across. The soldier sympathised with them, but in the daylight he told them that letting one family across would start a stampede to try to cross. Yet at night they tried again and this time he let them through under the cover of darkness, directing them to a farmhouse in the distance. The farmhouse, on the borders of the town Lyakhovichi, was owned by a nice couple who let them stay for the night and eat some food. The next morning Shlomo’s mother went to the town to speak with the Russian authorities, who gave them a room in the very farmhouse they had just spent the night at.

For the next few months Shlomo’s family lived very peacefully in Lyakhovichi. But a good ways into 1940, Shlomo’s mother got very sick, so sick she couldn’t take care of the children. She went to the Russian authorities to get some help, but the only help they could offer her was to take some of her children to an orphanage. Shlomo’s mom declined this option, but after a while with her sickness not getting better, she decided to give up her two youngest children, Benjamin and Rachel. Even with less stress of managing more kids, her sickness would still not improve. So this time she decided she must give up her next three kids: Leia, Simy, and Shlomo himself. Shlomo and his two other siblings were moved to a government orphanage, where they were the only Jews.

The three of them did well there, getting a school education and playing with kids their ages. Shlomo was doing particularly well in the school, so when the summer of 1941 rolled around he was selected for the honor of going to summer camp along with one other person from the orphanage. June passed by quickly, and it was almost the end of June when the Germans invaded in what was called Operation Barbarossa[3]. The fighting was so close to the summer camp that they could hear the faint noise of artillery and the sky high airplanes. The camp administrators rightly decided that it was too dangerous for the kids to stay there, and packed them off on a train heading east, without a word to the families trapped back in Poland. Many of the kids in the camp weren’t from orphanages, so the train would make stops wherever a kid could be dropped off with his or her family. People like Shlomo went all the way east, where they finally stopped at a place 300 miles southeast of Moscow.

Shlomo ended up there for the rest of the war. In the small village, there was an orphanage, and he stayed there at night. When he turned 14, they sent him to work in a factory for the communications industry. When the war was over in 1945, seventeen year old Shlomo requested some time off to look for his family. He headed back to Lyakhovichi, where he last left his family. When he knocked on the door of the farmhouse, the farm woman almost fainted, since she had thought he was dead. She then proceeded to tell Shlomo what had happened to his family. Since Lyakhovichi was close to the border, it was quickly taken over by the Nazis. The Nazi Einsatzgruppen[4] immediately started to round up the Jews, but Shlomo’s family was prepared, and hid from that first roundup. However, on the second roundup they were not so lucky and captured, taken out to the forest, shot, and buried in a mass grave. Shlomo was sad, but today he says that he never completely broke down since he always knew how small the chance was that he would see his family again. He never found any information on the rest of his family.

After hosting Shlomo for three weeks, the farm woman brought him to another Jewish survivor. The survivor had narrowly escaped the Germans earlier, and was now heading to Poland with the few Jews left in the community. Shlomo decided to join them, and after reaching Poland he headed down through Czechoslovakia and into Vienna, Austria. Vienna was a headquarters of sorts for allied authorities, and they directed Shlomo to a Displaced Persons Camp[5] (DP Camp) in West Germany. In these camps people would stay until they got the papers to move to another country. Shlomo stayed there for four years, before he got papers to move to the US. He was twenty one years old.

When he got to America, he changed his name to Wilfred (Bill) Kay. He settled down in Oakland, where he went to night school to learn English as the local JCC tried to find him a job. He had no skills for a decent job, but he had experience in a factory, so he got work in a Jewish Poultry Processor in Petaluma. He worked there for a year and a half, and afterwards he moved back to Oakland to get a job there. After a year on the Oakland job, Bill was drafted into the US army. Because of his ability to speak German, he was deployed there instead of Korea. In Germany, he worked with the US army as a sort of law enforcement officer, making sure the local governments cooperated. He was in Germany for two years, after which he moved back to the US. Finding a job in Oakland, he worked for a little while until 1957, when Bill decided he needed a college education. Around this time he met a San Francisco Jewish woman named Rachel. Falling in love, they married right after Bill found a dream job at PG&E (Pacific Gas and Electric Company) as an electrical engineer. He worked at PG&E for 30 years, with abundant promotions throughout the years. While Rachel died in 2010, Bill and Rachel had a daughter and now have three grandchildren. Bill persevered through hardships and is living a fruitful life, as a brave survivor of the Holocaust.

[1] A town in Poland by the river Narew. It is located in the Masovian Province, the most populous of Poland’s provinces. It is 43 miles north of Warsaw. Citation: https://en.wikipedia.org/wiki/Pu%C5%82tusk

[3] A huge scale invasion of the Soviet Union by Nazi forces. German victories were commonplace early on, when the Russians were taken by surprise. However the Soviets held long enough and when winter came around, the ill prepared Germans lost their momentum and were pushed back soon after.”Invasion of the Soviet Union, June 1941.” Citations: United States Holocaust Memorial Museum. United States Holocaust Memorial Council, 18 Aug. 2015. Web. 30 Dec. 2015. Lucas, James, War on the Eastern Front, London, Jane’s Publishing Company, 1979

[5] DP camps were camps in Europe holding victims of the war without homes. From 1945 to 1952 camps throughout Europe held over a quarter of a million Jews. Many Jews got immigration passes (or were smuggled) to the US and Israel. “Displaced Persons.” United States Holocaust Memorial Museum. United States Holocaust Memorial Council, 18 Aug. 2015. Web. 30 Dec. 2015.Wyman, Mark, DPs Europe’s Displaced Persons, 1945-1951, Ithaca, Cornell, 1998