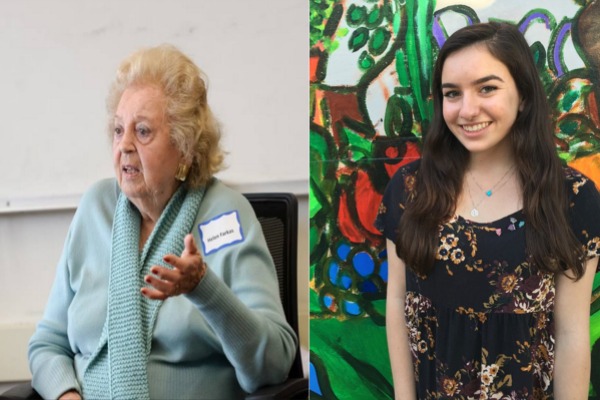 Helen F. was born in 1920, in Satu-Mare, Romania, as the middle child to 9 brothers and sisters. She grew up in a middle-class family that owned a large property; she learned to cook and clean, spent time with her Jewish and non-Jewish friends, and was engaged to a young man named Joe. The simplicity of her life drastically changed starting in 1940, when the Nazis took over Helen’s hometown, and Romania became Hungary[1]; the anti-Jewish laws in effect in Hungary were introduced to her city as antisemitism became more prevalent. Four years later, Helen and her family were forced into a ghetto in her hometown. Miserable and missing her fiance, who was working at a forced labor camp, Helen longed to leave the crowded condition of the ghetto.

With the belief of going to work at a factory, Helen excitedly departed the Satu-Mare ghetto in May of 1944 with her family. For 3 days and 3 nights, she traveled in a cattle car in horrible conditions, crowded with no food or water. When the cattle car finally stopped and they were permitted to get off, all Helen could hear was noise: the screams of crying children, the blaring loudspeakers, prisoners who began to push people out of the cattle car yelling “Don’t bring anything. Just get off!” Filled with confusion, Helen’s sister, Ethel, gave her baby son to her grandmother as advised by prisoners. This act ended up saving Ethel’s life. As Helen and her family entered Auschwitz, not knowing the horrors of the camp, they were lined up for a selection[2]. Since Helen and her sister Ethel were young and healthy, they were sent to the right to work. The rest of her family, including Ethel’s son and grandmother, were sent to the left and were taken to the gas chambers.

At the camp, Helen and Ethel were reunited with their sister Miriam, and her daughter Irene. As a result of having polio, one of Irene’s leg was 4 mm shorter than the other, causing her to have a limp. With the fear of Irene being sent to the left during selections, the three women did everything in their power to protect Irene. Helen would find out where selections were happening each day and make sure to be in the opposite side of camp to avoid them. When they had no choice but to strip down and line up for the selections, the three women would have Irene carry their clothes to cover the scar on her leg. Helen would stand behind Irene in line and trip her so that her limp would appear to be from that, and not from being sick. Even in dangerous, life threatening situations, Helen was selfless and put others needs before herself.

In January of 1945, Helen and Ethel were sent on a death march[3] along with 2,000 other women. There was continuous suffering throughout the entire march, with little food or drink and exhaustion from walking for so long; those who couldn’t keep up were shot. After a few months, the sisters escaped the march and ended up at schoolhouse that was being used as a camp for displaced Hungarians, of which Helen and Ethel pretended to be. The camp treated them well: they were able to eat, speak fluent Hungarian, and knit with the children. After some days there, they decided to make their journey back home to Satu-Mare, and arrived in July, 1945.

Helen was reunited with her fiance, Joe, and the two were married the following month. They were eager to start a new life together in America, hopeful of better opportunities than in Satu-Mare: much of their hometown was destroyed by German and Russian Soviet occupiers. In December of 1948, they began their escape to America from behind the Iron Curtains. They traveled through Budapest and waited at an Austrian displaced persons camp for 9 months before arriving in Wisconsin in 1949, sponsored by the Milwaukee Jewish Community. Helen began to rebuild her life once in California in 1950. She worked at Morse Cafeteria in San Francisco, while taking night classes to learn English. Along with Joe, she worked hard, paid taxes, and contributed to the Jewish community. Throughout her life, Helen used her strength and generosity to protect those around her, without losing sight of herself. Helen has dedicated her life to telling her remarkable story, so that her voice and the voice of the 6 million is never forgotten.

I will forever remember my experience with Helen; she reminds me why I take pride in my religion and how privileged I am as Jewish girl living in 21st century America. Helen has inspired me to be a leader in my Jewish community, just as she has been her entire life. During our interview, she remarked that “Life could be so beautiful,” a sentence that truly touched me.  Without all the hate in the world, without all the ignorance and injustices – “Life could be so beautiful.”

[1] under the terms of the Second Vienna Award (1940), Satu-Mare became part of Hungary.

[2] where people were directed to either one side (the majority) for the gas chambers, or to the other side, for forced labor.

[3] forced marches of long columns of prisoners under heavy guard, over long distances, under intolerable conditions.