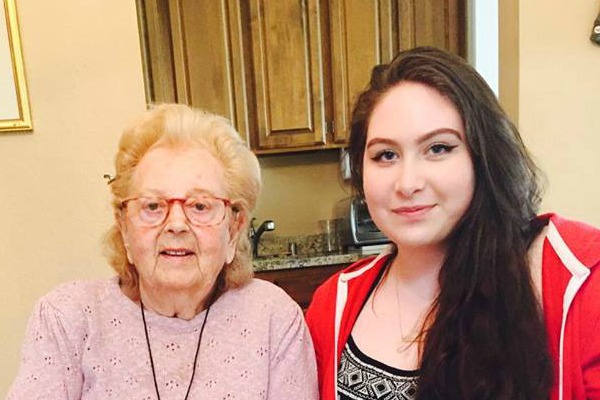 Helen F. was born in 1920 in the county of Satu-Mare, Romania.[1] Helen grew up in a large town of 100,000 where she attended a school that taught up to the 7th grade. If you wanted to earn a higher education then you would have to pay to go to a private school, but there were no colleges. In her town Helen emphasized that before the Nazi’s came around, there were no prejudices between Jews and Christians and that many of her friends, including her best friend Julie, were in fact Christian. Helen and her family practiced orthodox judaism but stated that they were not frequent temple attenders and most likely only attended 10 services in their time in Satu-Mare. Including herself, Helen’s parents raised 9 children that would always help around the house, doing their chores and caring for one another. Her family also housed tenants that paid with their help around the house. Her home had a “special” large garden where her father would grow fruit throughout the seasons and neighbors would look fondly at his trees. “Life was very pleasant,” Helen stated.

In 1940, the Nazi’s took over Helen’s hometown, and it became Hungary. In the next couple of years, Helen’s town slowly decreased in size and glory as Jews were being displaced from their homes. In 1944, Helen and her family were sent to a Ghetto where they would live for a few months. On May 23rd, 1944, Helen and her family were told that there were going to be taken to a factory where they would live and work, and that they were going to be allowed to take only a few ounces of their valuables. Ecstatic, they packed all night, deciding what exactly they would take with them, down to the ounce, until the morning of May 24th arrived. Her father said goodbye to his children and told them that one day he hoped to take his family to America, and show them Brooklyn, where he had lived for four years. The Nazi’s loaded her and her fellow female family members into cattle cars where they would live for 3 days and 3 nights with no food or water. Helen recalls her sister’s baby boy and his starving cries that filled the car. Finally they arrived at Arbeit, happy. That was until she saw the men with striped clothes and no hair, and heard the loud speakers shouting and dogs barking; the unforgettable loudness that she can still hear today. Refusing to get out of the cars, the Nazi guard began to push the women out, many falling and injuring themselves due to the steep step. The guards made them leave their ounces of belongings behind and whispered to Helen’s sister telling her to give her baby boy to one of the older women. Confused and frightened she held onto her child before he great aunt took the child from her hands. As the guards started to determine who would be sent to the left, and who would be sent to the right, Helen’s sister caught on to what was happening and tried to run for child who was being sent to die. Helen pulled her sister back, saving her life, and they were sent into Auschwitz[2]. Inside the camp there were 31 barrack that each held one thousand women. There Helen and her sister began to search for family and friends where they found their older sister Miriam and her daughter who was suffering from polio. Scared of her nieces fate if the Nazi’s found out she was disabled, Helen and her sisters came up with a strategic plan to hide her condition during the daily inspections. They were able to keep Miriam’s daughters illness a secret throughout the entirety of the holocaust. She is the only known pre-holocaust disabled survivor of the holocaust. Helen and her family would only stay at Auschwitz for a short amount of time until they were taken to a work camp where they would dig up frozen earth in the freezing cold. Many died from starvation, and hypothermia due to their lack of warm and survivable clothing. From there, Helen and her family and two thousand other women would be taken on a death march starting in January. Temperatures were freezing and all the women had to keep warm were horse blankets that they would huddle under together and women were constantly being shot when they couldn’t keep up. Helen still today claims that her and her family’s reason for survival was due to the strong work boots they had on when they went to the camps. She emphasizes her last few moments with her father before being sent away where he demanded that the family wear the leather boots he had made. Without those shoes, Helen and her family would had suffered the way many people had on the death marches when they were left bare foot because of their inadequate attire. The women would walk for months until finally being liberated on May 5th, 1945.

Helen and her family returned to their home town to find that one of her best friends Alex had survived. She remembers the anticipation of waiting at the train station with her friends and family, waiting to see who had survived. She heard word that Alex’s sisters had not made it through and highlighted her tragic words of telling him “you don’t have to go to the train station anymore.” Soon after, Helen finds out that her fiance had survived due to being a well known soccer player. On August 4th, 1945, Helen and Joe married. It took 3 years for Helen and her family to be able to relocate to America. To do so, Helen and family were sponsored by the Milwaukee Jewish Community and sent to a displaced person camp for 9 months. On October 10th, 1949, the family arrived in New York before being sent to Milwaukee the next day where they would live for nearly a year. After discovering that they had family in California, they to the bay area. Helen and her family would go to night school 3-4 nights a week to learn english so that they could get jobs to fuel their lives. Helen and Joe later became parents to a baby girl. Joe unfortunately passed away a few years ago. Helen still regularly visits high schools and events where she speaks of her story and educates the next generation of the holocaust.

Meeting Helen and learning about her and her story has brought my knowledge of the holocaust to one of a deeper and emotional level and has changed my outlook on the importance and value of life. Helen’s story has taught me that who you are does not define your character or strength. She has reaffirmed my connection to my spirituality and heritage and her story has made me to never feel ashamed, but instead proud, of where and who I come from. I thank her for her time and her devotion to educating the world.

[1] Satu Mare is a multicultural city, with a population mix of Romanian, Hungarian, Roma, German and other ethnicities.

[2] A concentration/extermination camp under the Nazi rule in World War II where over one million Jews perished.