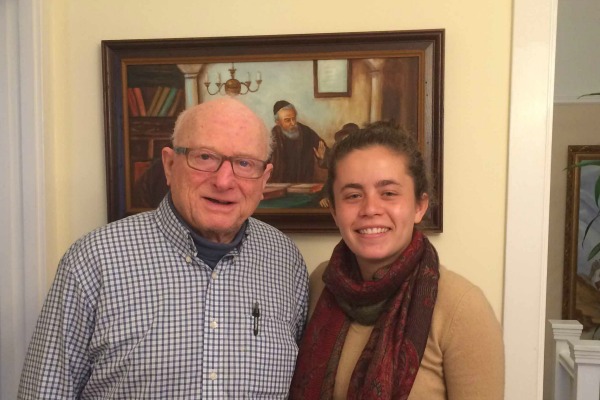 Leon R., now 84 years old, was born in Czernowitz, Romania in 1931. There in Romania Leon grew up with his mother and father in a big condominium with many other families. He had a best friend named Marcello, and the two of them would play soccer during all hours of the day, and when it got dark they would go inside and play button soccer on the kitchen table.

Until Leon was ten years old, it was peacetime. When the war started, refugees would come into Romania from Poland. In 1940 Romania was invaded by Russia, and life changed overnight. All schooling stopped, and to have one loaf of bread you had to stand in line for almost three days. Leon’s father was laid off work, and their family had no money. In June of 1941 Romania allied with Germany. That September, Leon and his family were forced to wear the yellow stars. His family, as well as cousins, were all forced to live in a ghetto[1], all living in one shack, ten people in total. In October, one morning at 4:30am, Leon and his all his family members were herded to a train, where they were put in box cars with 80 people in total in one car. They were on these trains for five days. No food, no water, no where except the boxcar to empty themselves. Old and young were all piled in together. The mood was utterly hopeless. Many people chose to commit suicide. There is a picture of a man before and after the five day train ride[2]. The change is striking, after only five days the bodies of those in the cars were weakened and frail. They arrived at the Dniester river, and were put on the river on a makeshift boat made out of logs. Arriving in Mogilev-Podolsk, Ukraine, Leon and his family were taken to Mogilev, a camp in which they were told no one makes it out alive. By some miracle, Leon’s mother was able to use money to bribe the soldier that was walking with them to let them go, and they managed to escape before they entered the camp. They found a Jewish family who took them in, but they had no food, and had to go to the market to beg. But there was always the great risk of being discovered, and soon thereafter Leon’s family needed to leave so as not to be discovered. Leon’s mother had the idea of going to talk to a German captain, Heizman, who was in the area. The captain met with the mother, and told her he would help the family get to a camp where they would be able to live safely. In exchange for his help, he said to the mother, “pray for my son who is fighting with the army.” That is all he asked of Leon’s family, and the family made it safely to a ghetto. It snowed the day they traveled to the ghetto which kept them hidden, and kept people off the streets. Yet another miracle had aided Leon’s family.

The ghetto was called Djurin[3], in which there were 3,500 Jews at the beginning of the war. Only 600 were left in the end. Leon and his mother and father lived in a tiny shack, with no food or water. Because of their fatal fatigue, they could not lay down during the day, only sit in upright positions for fear of passing away. Their bodies were so weak, with no access to any means of nutrition. A day felt like a year, the pain of hunger gnawing constantly at their bodies. When men were wanted for the German line, soldiers came to Leon’s shack to take his father. So Leon hid his father as well as a few other men behind a loose borded area in their shack. A neighbor saw, and outed them. When the soldier busted through the door, he aimed his gun at Leon’s mother. Leon picked up a knife that was on the table behind the soldier, and held it there, ready to come to his mother’s rescue. But the soldier didn’t hurt them, and took away Leon’s father. Luckily for his father, they didn’t need any more men, and after three or four weeks he was back.

The next winter, Leon’s mother was sick with typhus. Leon went to the farms in the neighboring areas to scavenge for food, and would bring food back to his mother in the hospital. Every time Leon went far to look for food, neighbors told him he wouldn’t make it. But Leon was determined. He knew what he had to do, Leon was ten years old when the war started. He was aware of everything that was going on. He knew he had to take care of his parents and not once did he lose faith in his promise to care for them. At this same time when his mother was sick Leon was twelve years old. He became sick with typhus just like his mother. But in those days it was known that children only live for a few days when sick. Leon was put in the morgue, expecting that he was going to die. He was in there for five days, feverish and laying in his own waste. But on the fifth day he broke through his fever and was able to regain consciousness. Luckily there was a window open in the morgue, and Leon was able to call out to his father who  was walking by. His mother had recovered too and the family was able to keep on living. Leon found different ways to scavenge for food, such as strategically putting stones in the way of a wagon, so that the wagon would jiggle and the food would be knocked off. This food that Leon got from the wagons lasted the family the whole winter. Eight sugar beets could last for six weeks.

In March of 1944, Leon and his family walked back to Czernowitz after the partisans[4] liberated Djurin ghetto. The war was still going on and everything was in disarray. It took nine days to walk back. They were all so weak they barely made it. When they got back to their condominium, it turned out they were the only family to make it back fully intact. They were able to move back into their apartment, and Leon’s mother and her sister opened a small deli where they were able to sell whatever food they could get ahold of, and it actually turned out to be quite successful. In passing one day, Leon saw his friend Marcello from his childhood. They both paused, but continued on their way in silence. They were too different at this point. Their circumstances had changed drastically in different ways and there were no words to be said for the horrors that had been seen by these young boys.

Leon’s father was caught by the Russians and taken away for nine months, and every morning he was woken up and interrogated to see if he was a spy or not. When Leon’s father came back, the family decided to leave and they escaped across the border from Romania to Poland. They wanted to go to Palestine, but the British stopped them and put them in a displaced persons[5] camp. Even though they were fairly safe, they didn’t dare venture outside the camps, or look Germans in the eye.

In 1948 the family was trying to figure out where to go. Family members would send them care packages but they still had nowhere to go. In February of 1951, they received permission to sail to New York. They sailed to the U.S., “lost souls standing on the deck looking toward the glimpses of a better life.” It was three weeks before Leon’s twenty-first birthday. The world was finally filled with sunshine. Leon felt that “that was the day I was born.”

In 1953 Leon bought a home with his parents in San Francisco, that is the same home he still lives in now. He has two children, has served in the army and held many esteemed jobs. Determination, ultimately, was what kept Leon going throughout the years of the Holocaust. “To live and save my parents, in hopes of a better life. It was the will to live.”

[1] Jewish ghettos were a way for Nazis to separate Jews, and ultimately destroy. http://www.ushmm.org/wlc/en/article.php?ModuleId=10005059

[2] Leon showed me this picture that he has kept all these years to show the striking change in the man.

[4] Some Jews who managed to escape from ghettos and camps formed their own fighting units (called partisans) http://www.ushmm.org/outreach/en/article.php?ModuleId=10007743