In the Next Chapter, teens develop profound connections with Holocaust survivors. Students build a special community of social responsibility and genocide awareness.

We are so proud of the hard work and meaningful reflection that each student put into their project during the 2018-2019 program. Here are a few examples of personal projects by this year’s Next Chapter students.

For his personal project, Jeremy met with a survivor, wrote a poem, and etched it onto acrylic.  He writes:

During my research on the Holocaust, I came across numerous mentions of butterflies in the victims’ and survivors’ drawings and poems. One discovery that particularly struck me was the hundreds of butterflies that had been scratched with fingernails and pebbles on the walls of the Majdanek concentration camp by the Jewish victims. It was believed that the Jewish prisoners knew they were going to die.  Just like butterflies leaving their cocoons, they believed that through death, they would leave their bodies and sufferings behind to become immortal spirits.  This wall of etched butterflies inspired my personal project. During these past months, I have had the honor of listening and talking to several survivors. After interviewing one of them, AnneMarie, at her house, I decided to capture her touching story in a detailed biography. Combining my passion for preserving history and technical arts, I also wrote a poem about the survivors’ experiences and created a butterfly design that symbolizes freedom, resilience, and hope. I then etched them onto an acrylic piece using computer-aided software and the laser cutting machine at my school. 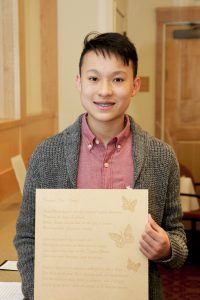 Jeremy with his acrylic piece.

For her personal project, CeCe created a symbolic art piece.  She writes:

The piece itself is a luminary to express that even in darkest times, there is always hope, a light at the end of a tunnel. Many of the survivors said that there were times where they wanted to lose hope; however, the love for their family, faith in God, and determination overshadowed their will to give up. Around the entire piece is barbed wire to represent not only the wires that imprisoned them, but symbolically the barrier that held them back. The wires symbolize a sense of fear as the Holocaust entrapped them in a state of being lost and afraid to fight back. However, with the light shining through, the wires mean nothing. The Star of David on all sides is a symbol that represents the Jewish people, specifically the star that they were forced to wear to identify them. The light that shines through it proves that there is always hope, that fate plays out in various ways.

The shape of the triangular pyramid itself is meant to represent the unity that the survivors developed among one another. The triangle is the strongest and most stable shape; however, when one side is removed, it falls apart. I chose this shape to incorporate the strong bonds that they formed among one another, but also of the selfless sacrifices and risks that they made to save family and even complete strangers. For example, Leon, a survivor of the Holocaust, took many risks to save and protect his family. He was willing to kill a soldier to protect his mother and shielded her from a soldier’s attack. His promise to protect his parents no matter what stood out to me as he proved that he is willing to risk his own life and endure the pain if it meant that his parents would survive. 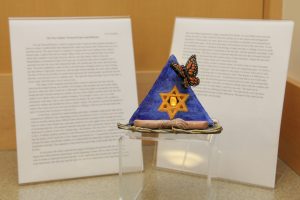 For her personal project, Brett wrote a speech in Original Prose and Poetry format.  A short excerpt:

It shouldn’t have surprised me that we were blamed for the Nation’s ills,

After all, we were accused of starting the Plague.

But it was the 20th century,

Had I known they would accept a leader who spread hate,

Where does this bigotry come from?

Listen to me, this is hard to say;

Their intolerance and your indifference,

Caused the end of millions of lives,

But it is the 21st century,

We will never accept a leader who spreads hate.

At the Next Chapter orientation the students created a timeline of anti-semitism spanning from 500 CE until now. Unfortunately, anti-semitic sentiment has not disappeared, but has persisted. I recently worked on a puzzle with my mother; a collection of images from Shakespeare.  I was able to identify The Merchant of Venice scene by the depiction of a hook-nosed man with a protruding brow, a sideways look, holding a set of golden scales and wearing a yarmulke.  It was painted in 2001 by an artist in Utah, but it reminded me of the fabricated caricatures of Jews perpetuated by the Third Reich in their books and political dogma. These preposterous images were designed to inspire race hatred.  The character Shylock, described as a usurious, vengeful trickster in the 1590s, was exaggerated on stage to prove   Jewish villainy, and utilized as propaganda on German radio in the 1930s, only to be parodied in 2001 for display at the Folger Shakespeare Library in Washington DC. At our last New Chapter  meeting, Gloria charged each of us with the mission of carrying her story forward and spreading the message of the Holocaust. To learn that our history shapes our future, to step up, to speak out, to ensure the world will never allow a Shoah to happen again.

Don’t you know what happened before?

Our ancestors are speaking to us from the earth, from the ashes. 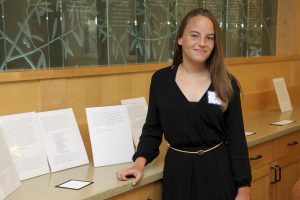 Brett with her work of Original Prose and Poetry

For her personal project, Miriam played the theme from Schindler’s List, in an arrangement for flute.  She writes:

Music has been a huge part of my life. I’ve been playing the flute for nine years. When I went to Yom Hashoah, a huge part of the ceremony was music. The music touched me and it conveyed a message that words cannot. Because of the huge influence music has had in my life and the inspiration and emotion it can convey, I chose to play the theme from Schindler’s List on my flute. The song is hauntingly beautiful and tells a story of pain and loss and yet hope within a time of great turmoil and strife. It’s a simple melody but I think it can move people greatly.