The Next Chapter enables high school youth to develop profound connections with Holocaust survivors. By participating in the program, students build a special community of social responsibility and genocide awareness.

Students in the 2017-2018 Next Chapter cohorts. The program is offered both in San Francisco and on the Peninsula.

We are so proud of the hard work and meaningful reflection that each student put into their project during the 2017-2018 program. Here are a few examples of personal projects by this year’s Next Chapter students.

For her personal project, Lian chose to perform a piece of music on violin and create a Stolperstein. She writes:

“When I was thinking about what I wanted to make for my personal project, I knew I wanted something that will honor the Holocaust survivors in my family. I also knew that I wanted to incorporate two things that I love, and make up a big part of my life: Violin and Laser Design. 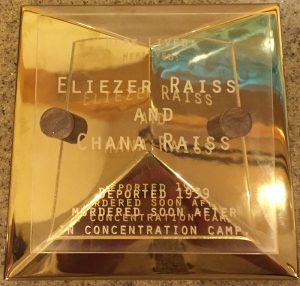 Both of my great grandparents are survivors. My great grandmother, Sarah Raiss was born in the Czech Republic, and moved to Hungary when the war started. Her parents put her in a nunnery and that is how she survived. One of the few good memories she has from her time in Hungary is the music, and in particularly the song Czardas, by a Hungarian composer. My grandmother always talks about how she loves his music and how she loves to hear me play. So I thought that it would be perfect to record myself playing that piece to honor her and her amazing story.

For my great grandfather, Dov, I decided to make something that I actually heard from one of the amazing survivors we were lucky to hear from, Jeanette. Dov was the sole survivor from his side of the family, so when I heard that Jeanette made a “Stolperstein” or “stumble stone” to honor her late family members, I thought that that was perfect. I created my own version of a stumble stone. I had two names put on it; (the names of Dov’s parents). Since I did not have an actual gold brick, I decided to take a golden tile, and I laser cut and acrylic square with the engraved details on it, and mounted that on the tile.

I have greatly enjoyed creating this project and I think it is a great way to honor the survivors.”

For his personal project, Edwin chose to write a poem entitled “Remember Me”: 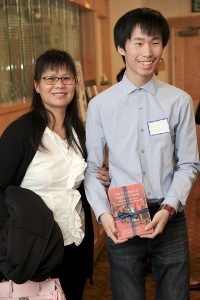 Edwin and his mother at the graduation ceremony.

Remember the Holocaust not by the dictator,
Not by the numbers,
Nor the room held with the innocents,
Awaiting their impending doom,
We must honor those who have departed from this world
To a paradise of unimaginable proportion,

Who am I?
I am like you,
I am no hero nor alien,
I came from the belly of the best,
A place that hungers for fear.

Remember me by my name,
The one given by my mother in my native tongue,
Not by the letters and numbers scarred in my skin,
The ink that seeped deep under my pores,
Leaking through to my heart
And marking my soul,

Remember me and all my fellow friends,
Those from my blood,
To those unfamiliar faces,
Friends fallen to the cold snow smothered with feet on their back,
And survivors that have met Death’s door,
Then slammed the door shut,

If you ever forget me,
Remember my stories,
The hardships I have faced eye to eye,
The pains that numbs my body to this day,
Let them ring through your ears
Let them ring past to your children and grandchildren,
Let the future remember me.

For her personal project, Mia chose to express herself with photography. She writes: 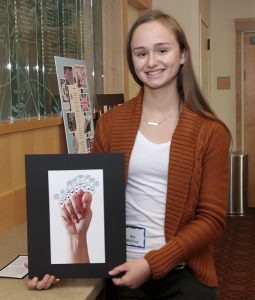 Mia with one of her photos.

“I decided to take pictures of peoples’ hands spelling the word “Holocaust” using American Sign Language. I drew out the progression of the Holocaust unfolding on the pictures of individual hands using the images and stories that struck me the most throughout the program. The individual hands depict: dehumanization (with Nazi flags symbolizing the perpetrators), the progression of the Holocaust (seen through cattle cars, concentration camps, and crematoria), the silent prisoners (striped pajamas), the resistance (symbolized by an armed weapon), the immense number of people killed (with a person reading from a textbook about the Holocaust), and individual’s breaking points. The second to last hand shows Stolpersteine cobblestones (stumbling stones), families returning home after being liberated, and people who escaped to other countries such as the United States of America (the relief upon spotting the Statue of Liberty). I wanted to incorporate people’s hands since they convey so much about a person’s occupation, age, story, and are all unique. By using American Sign Language, I was able to include a bit of my personality in the piece as I have been learning it the past year and have taken interest in Deaf culture. American Sign Language is a ‘silent’ language full of rich meaning. In comparison, the victims of the Holocaust were silenced,but have so much to share and convey about their experience.”

For his personal project, Henry chose to write a paper entitled “Bulgaria & Romania: Overlooked by History.” A short excerpt: 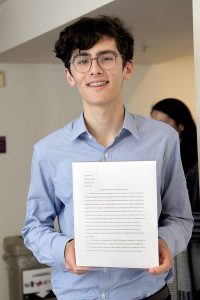 Henry with his project.

“The Holocaust is one of the most tragic and horrific events to ever happen in the history of humanity. When the Holocaust is taught in schools, it is usually talked about in the context of World War II and extermination camps in Poland, Germany and France. There is a key lack of understanding about the breadth of the Holocaust in Eastern Europe. Romania and Bulgaria had many horrific events happen within their borders during World War II; however, they are lesser known than the events that occurred in Poland and Western Europe. With an event as tragic as the Holocaust, it is imperative that history remembers each country’s own unique tragic story, as all of the stories are equally tragic. Throughout World War II the horrific events targeted towards the Jews in both Romania and Bulgaria have been sidelined from mainstream textbooks; however, if one reads the online Holocaust Encyclopedia made available by the Holocaust Memorial Museum in Washington D.C., the often overlooked crimes against the Jews in Romania and Bulgaria are presented as equally important to the totality of the Holocaust in the rest of Europe.”