Turning “Never Again” into a Battle Call with Bite

Genocide in Darfur and the U.S. Response

In the wake of the Bosnian, Cambodian, Guatemalan, and Rwandan Genocides, the common idiom “Never Again” that emerged after the Holocaust may seem like a mute battle cry. In my work empowering local survivors of the Darfur genocide to join our Survivor Speakers Bureau and share their stories with students, I am reminded just how far we have come and just how far we have yet to go towards making “Never Again” a reality.

Fifteen years ago, former-U.S. Secretary of State Colin Powell labeled the violence in Darfur, Sudan as “genocide.” It was the first time the U.S. administration applied the “genocide” label to an ongoing conflict. In this blog post, we will consider how Powell’s historic decision fits into the ever-evolving landscape of human rights and the future of humanitarian action.

A Crime without a Name

While growing up in the small town of Orzerisko, Poland Rafael Lemkin read with fascination and horror the stories of Armenian Christians being murdered by Ottoman Turks during World War One. He recognized that the Ottoman Turk’s targeted annihilation of Armenians constituted a type of violence different from war.  Like the antisemitic pogroms in his native Poland, or the colonial violence in northern Africa, Lemkin saw in the killings of Armenians a crime without a name. 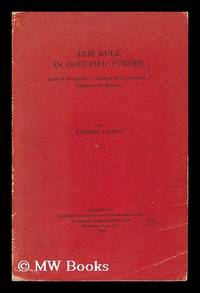 The same year that Adolf Hitler became Chancellor (1933) and started Germany down the path of murderous infamy, Lemkin was working to legally protect ethnic, religious, and social groups. His work was disrupted in 1939 when Germany invaded Poland and Lemkin had to flee to the U.S. to escape racial persecution. In 1944 Lemkin published Axis Rule in Occupied Europe and within it proposed a new term. Taken from two ancient words—the Greek word genos (race, tribe) and the Latin –cide (killing)—Lemkin coined the word genocide and then lobbied the United Nations (UN) for its passage into international law, which finally occurred on December 9, 1948.

The UN Convention on the Prevention and Punishment of Genocide marks a profound and important advancement in humanitarian law. In order to prevent or punish a crime, it must first be diagnosed as a violation of international/national law. The UN definition defines genocide as the intent to kill, in whole or in part, a national, ethnic, religious, or racial group. The UN-ratified definition, far narrower than the one Lemkin proposed, hinges on proving that it is the “intent” of the perpetrator to kill one or more of the four protected groups. And herein lies the challenge of employing the UN definition of genocide to preempt or punish crimes of genocide! How do you prove a perpetrator’s intent?

Unlike war, wherein two or more nations are fighting, genocidal regimes often target minorities within   their own society (e.g. the Jews in Europe or the Armenians in Ottoman Turkey) who lack the means to fight against their oppressors. In order for violence to be considered genocide, and not some other legally defined crime like Crimes Against Humanity, the perpetrator must intend “to kill in whole or in part” one of the four protected groups, which, again, is a limiting factor. What about political groups? What about violence targeting homosexuals? What about gendered violence? The challenge of proving a perpetrator’s intent and the narrow parameters of who constitutes a victim make the crime of genocide difficult to enforce. Proving that a country is committing genocide has been so complicated that it took the U.S. fifty-six years to finally refer to an ongoing conflict as a genocide and when it did, the UN disagreed.

U.S. Secretary of State Colin Powell became the first sitting member of the U.S. administration to call an ongoing conflict a genocide on September 9, 2004. After visiting Internally Displaced Persons (IDPs) camps in Darfur in late June 2004, Powell and then-UN Secretary General Kofi Annan walked away with two different impressions of what had forced thousands of Darfuris to flee their homes and seek refuge in IDPs. According to Annan, the murder of thousands of “African” Darfuris at the hands of militia groups directed by the government of Sudan constituted Crimes Against Humanity. Powell, speaking before the Senate Foreign Affairs Committee three months later, concluded that “genocide has been committed in Darfur and…the government of Sudan and the Janjaweed bear responsibility—and genocide may still be occurring.”[i] 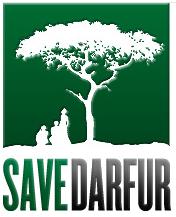 While Powell’s statement did not stop the genocide, which according to some is ongoing, it did spur action. National organizations such as Save Darfur and the Enough Project, as well as international organizations, launched targeted campaigns to boycott the government of Sudan. Some think these sanctions helped pressure the Sudanese government to participate in international peace negotiations to stop (or ultimately reduce) the violence in Darfur. 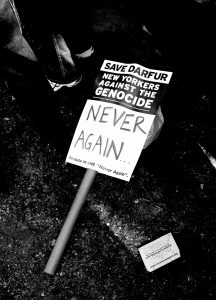 While the UN still has not classified the killings in Darfur as a genocide, the International Criminal Court, created to try perpetrators of war crimes or genocide, issued an arrest warrant for Sudan’s sitting president, Hassan al-Bashir, on charges of genocide, war crimes, and crimes against humanity.

Turning “Never Again” into a Battle Cry with Bite

Considering the advances in human rights that the international community has made since the Holocaust—e.g. the UN Convention of Genocide (1948), the creation of an International Criminal Court to try genocide perpetrators among others (1998), and Powell’s announcement of the Darfur Genocide (2004)—I have faith that “Never Again,” while not a current reality, is still a possibility. “Never Again” requires action—it was never meant to just be a phrase. The first step was diagnosing the problem, step two was using Lemkin’s term to intervene, and step three is up to us.

[i] “The Crisis in Darfur: Testimony Before the Senate Foreign Relations Committee,” statement of Secretary of State Colin Powell (Sept. 9, 2004), available for viewing at https://www.youtube.com/watch?v=JuM5CXDKjI0

“A Call to Your Conscience,” Kate Mereand-Sinha on Flickr, https://www.flickr.com/photos/katmere/146631783/