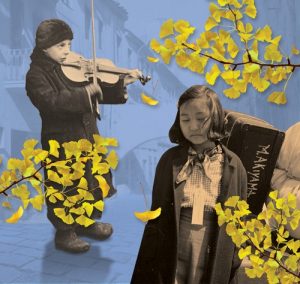 We are excited to partner with Seattle-based Music of Remembrance (MOR) for an upcoming performance of Voices of Witness.

The program marks MOR’s fourth annual concert in the Bay Area, premiering new compositions by Ryuichi Sakamoto and Christophe Chagnard. Sakamoto’s new work, Snow Falls, draws on melodies from his film score for “Nagasaki: Memories of My Son.” It sets the iconic poem of the same title by Kiyoko Nagase, both in the original Japanese and in English translation by Japan’s Empress Michiko. Chagnard’s multimedia work Gaman focuses on the experience of people forced into incarceration camps because of their Japanese ancestry during World War II. The title refers to the struggle to endure the unbearable with patience and dignity. Combining traditional Japanese and classical Western instruments, this work brings a powerful story to life through testimonies of the words and images created by three artists and poets during their captivity in the Minidoka camp. Included in the program is Paul Schoenfield’s Sparks of Glory, four passionate portraits of Holocaust defiance taken from the true accounts of heroes too modest to recognize their own heroism. In addition, soprano Roslyn Barak will interpret Songs from Terezín that the prisoners wrote and sang under the noses of their Nazi captors.

MOR’s chamber ensemble, drawn from the ranks of the Seattle Symphony, is joined by guest artists baritone/narrator Erich Parce; sopranos Roslyn Barak and Ann Moss; and Ringtaro and Asako Tateishi of Seattle’s School of Taiko.