History of the Diary

Rywka Lipszyc was a 14-year old Jewish girl, orphaned and living in the Lodz ghetto. From October 1943 to April 1944, she recorded her thoughts, feelings, hopes and dreams in her diary. Along with 67,000 other inhabitants of the Lodz ghetto, Rywka was deported to Auschwitz-Birkenau in August 1944. Months later, in June 1945, her diary was found in the ashes of the crematoria at Auschwitz-Birkenau by Zinaida Berezovskaya, a doctor with the Soviet Army that had liberated the camp.

The diary details Rywka’s activities at work and in school; her relationships with her friends and family; and describes events in the ghetto. Despite the crushing circumstances she endured in the Lodz ghetto, Rywka worked, studied, participated in literary clubs and cultural activities, wrote poetry, and dreamed of a better future.

This diary, preserved by the Berezovskaya family for over 60 years, has been translated into English from the original Polish, and was first published by the JFCS Holocaust Center and Lehrhaus Judaica in the spring of 2014.

Select a category below to learn more

Discovery of the Diary

In the spring of 1945, a doctor with the liberating Red Army plucked a diary from the ruins of the crematoria at Auschwitz-Birkenau. The physician, Zinaida Berezovskaya, a fierce Soviet patriot and committed Communist, had left her husband and son to fight the great battle against the invading Nazi army and had accompanied Soviet Army troops to Auschwitz.

Zinaida took the diary with her when she returned to her home in Omsk, in southwestern Siberia, where she and the diary remained until her death in 1983. Her effects were sent to her son, Ghen Shangin-Berezovsky, who lived in Moscow. Upon his death in 1992, Ghen’s belongings went to his wife, Lilavati Ramayya. It was at her mother’s house in Moscow that Ghen’s daughter, Anastasia Berezovskaya (granddaughter of Zinaida), first encountered the diary on a visit in 1995. Immediately sensing its value and worried that it could end up ignored, neglected, or worse, Anastasia took the diary with her when she returned to San Francisco, where she had emigrated in 1991. 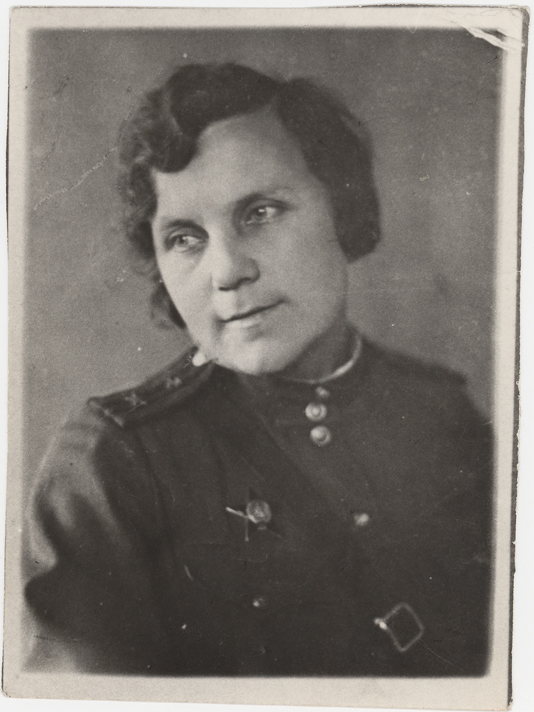 Over the ensuing years, Anastasia made several attempts to find an appropriate institution to collaborate with—one that could identify the diary’s value and perhaps translate and publish it. In June 2008, she contacted Leslie Kane, executive director of what was then the Holocaust Center of Northern California. Leslie passed on her email to Judy Janec, the center’s archivist and librarian, and within days, Anastasia brought the diary to the library. It was a breathtaking artifact—an unknown diary written in the Lodz ghetto—and a rare opportunity to add to the historical record. Handwritten in Polish, in a school notebook, the diary was in relatively good condition. The first two pages were detached from the rest; part of the writing was obscured; and there were some water stains and rust. But considering its age and its provenance—the ruins of the crematoria at Auschwitz—it was remarkably well-preserved.

One hundred twelve pages long, the diary was accompanied by a note and two newspapers from the time. The diary’s first entry was dated October 3, 1943, Litzmannstadt ghetto. It concluded in the ghetto, on April 12, 1944. Clearly, this was a remarkable document! How remarkable neither Anastasia nor others could determine without assistance. We decided to digitally reproduce a few pages so that we could share them with experts in the field. Carefully, we scanned several pages, and in this way, began the process of bringing this diary, which had slumbered in darkness for nearly 70 years, to light. 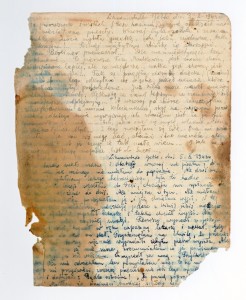 Page 1 of the diary 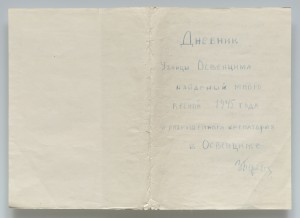 Outside of the note left by Zinaida Berezovskaya, explaining where and when she found the diary. 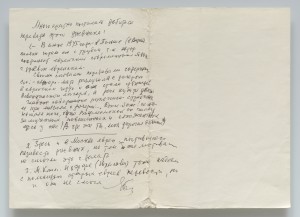 Inside of the note left by Zinaida Berezovskaya, detailing her efforts to have the diary translated

Many times I tried to obtain translation of this diary!

1. In June 1945 – in Poland (Warsaw) the Poles read it with difficulty, as the author combines modern Jewish language with ancient Jewish. In their own words, they related the contents:

Author – the Mother – was separated from her daughter in a Jewish ghetto and she became a prisoner of Auschwitz herself, while the daughter was taken away somewhere.

The main theme of the manuscript – suffering of the Mother as she thinks about her daughter: “G-d! G-d! Last night was worse than the Night of Bethlehem in the numbers of the tortured to death, hanged, and burned here with us. And where are you, my dear daughter!”

2. Here in Moscow the Jews who tried to translate the diary could not do that for the same reasons.

3. M. Klim. Ioffe (Yurasova) also hoped to translate it with the help of older Jews but they could not do it.

February 9, 1945 edition of Lenin’s Flag, a Soviet Army newspaper, describing what Soviet liberators found when they arrived at Auschwitz-Birkenau on January 27, 1945. 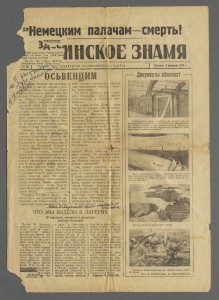 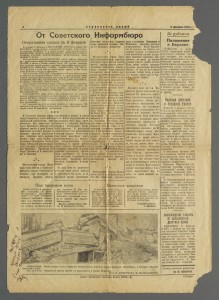 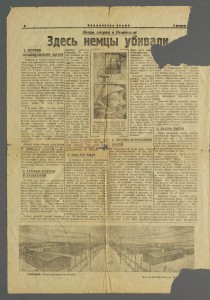 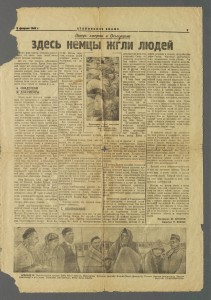 Zinaida wrote a note next to the photograph of the ruins of Crematorium III, pointing out the location where she found the diary in June 1945. 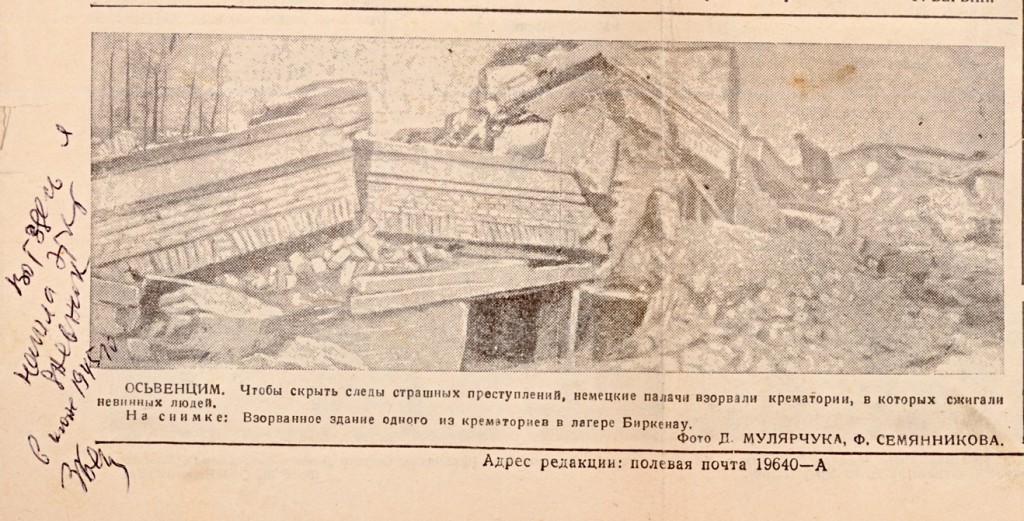 On the recommendation of Zachary Baker, then curator of Judaica at Stanford University and a member of the board of directors of the Holocaust Center, with whom we first shared the scans, we approached Professor Robert Moses Shapiro of Brooklyn College, an eminent scholar and expert on the Lodz ghetto and its diaries, as well as a fluent reader and speaker of Polish, Hebrew, and Yiddish. Dr. Shapiro quickly recognized the special value of the diary. After viewing the sampling of pages that we had scanned, he felt sure of its authenticity. Over the course of the next months several steps were made to ensure that this extraordinary diary would be shared with the world.

The first step was to make a high-resolution digital reproduction of the diary. In this way its intellectual content would be preserved forever. Even if something were to happen to the actual artifact, the words of the diarist would be saved. The scans of the diary were viewed by Marek Web, former archivist at YIVO Institute for Jewish Research in New York City, who also confirmed its authenticity.

The next step was to have it transcribed. At the recommendation of Dr. Shapiro, we turned to Ewa Wiatr of the Jewish Research Center at the University of Lodz. She agreed to transcribe and provide annotations to the diary. It was Ewa who discovered the identity of the writer and confirmed it through a check of the Lodz ghetto records. The diarist helped with this identification by naming herself in the diary. Thus we began our acquaintanceship with Rywka Lipszyc.

In December 2010, the Holocaust Center of Northern California was taken under the wing of Jewish Family and Children’s Services (JFCS) of San Francisco, the Peninsula, Marin and Sonoma Counties, headed by Dr. Anita Friedman. JFCS worked in partnership with Lehrhaus Judaica, a non-denominational Bay Area center for adult Jewish education, founded by Fred Rosenbaum, to publish the diary. In a fortunate coincidence, Mr. Rosenbaum had just co-authored a book about a young woman’s experiences in the Lodz ghetto and Auschwitz— Out on a Ledge (Wicker Park Press, 2010)—with its subject, Eva Libitzky.

The next step was to translate into English the diary and the annotations that Ewa Wiatr had prepared. Working with two translators, Malgorzata Szajbel-Kleck and Malgorzata Markoff, we soon had an English translation available. Alexandra Zapruder, the editor of Salvaged Pages: Young Writer’s Diaries of the Holocaust and the winner of the 2002 National Jewish Book Award for Holocaust literature, agreed to join our project as editor of the diary and to offer an introduction to and perspective on an adolescent’s emerging identity in the face of extraordinary circumstances. Historian Fred Rosenbaum provided an essay on the Lodz ghetto, and Hadassa Halamish, the daughter of one of Rywka’s cousins, contributed her mother Mina’s and aunt Esther’s recollections of their time with Rywka in the ghetto and in the camps. Esther also provided a postscript.

Emerging from the Shadows

So, with the assistance of archivists, historians, Holocaust survivors, translators, and editors—as well as the support of philanthropists, agency directors, and so many others around the world committed to Holocaust education and remembrance—our goal has been achieved. Rywka Lipszyc will not remain a nameless victim of the Holocaust. Her words will survive her:

“A few years ago … in my dreams, when I was imagining my future, I could see sometimes: an evening, a studio, a desk, there is a woman sitting at the desk (an older woman), she’s writing … and writing, and writing … all the time … she forgets about her surroundings, she’s writing … I can see myself as this woman.”