The last passage of Rywka Lipszyc’s diary was written in April 1944. We know that she was deported to Auschwitz during the liquidation of the Lodz ghetto in late summer 1944. After all, the diary was found there. But what happened to Rywka and her diary once she arrived in Auschwitz?

The Diary at Auschwitz

We know from numerous Holocaust survivor accounts that when deportees arrived at Auschwitz-Birkenau they faced two possible fates. Rywka could have been selected for the gas chamber and perished immediately, or she could have been spared to become part of the Nazis’ vast slave labor force. In either case, all of her possessions would have been taken from her. Once her belongings, including the diary, were gathered together, they were most likely taken to Kanada, Auschwitz-Birkenau’s vast sorting warehouse. There, other concentration camp inmates went through the clothes, packages, and suitcases; their job was to set aside anything that might be useful in the Nazi war effort. Could someone in Kanada have found Rywka’s diary and decided to keep it or hide it? Could it have been deliberately hidden near the crematoria in the hope that someday it would be found?

At the beginning of our work on this mystery, Professor Robert Moses Shapiro had mentioned that Rywka’s diary could be one of the manuscripts buried by the Sonderkommando. Victims of what Primo Levi called “National Socialism’s most demonic crime,” the Sonderkommando were those prisoners who were made to escort arriving Jews into the gas chambers, remove their bodies to the crematoria, and dispose of their ashes. Isolated from the rest of the camp, the Sonderkommando labored under unspeakable psychological, emotional, and spiritual burdens.

Could Rywka’s diary have been one of the manuscripts he referred to? During her visit to the Auschwitz Memorial, JFCS Holocaust Center archivist Judy Janec contacted Dr, Wojciech Plosa, the head of archive at the State Museum Auschwitz-Birkenau in Oswiecim, Poland. After viewing scans of Rywka’s diary and the newspaper article that Zinaida Berezovskaya saved with it, he agreed that it was likely that Rywka’s diary is the ninth of the Sonderkommando manuscripts to be recovered.

After Rywka was initially identified by the diary’s transcriber, Ewa Wiatr, in 2009, the JFCS Holocaust Center’s archivist searched Yad Vashem’s Central Database of Shoah Victims’ Names for any records relating to Rywka. Names in this database have been compiled from historical records and other documentation and from “Pages of Testimony” submitted by family, friends, and researchers to memorialize individuals who perished in the Holocaust. The JFCS Holocaust Center’s archivist, Judy Janec, found documentation of Rywka Lipszyc in the database from a post-war registry of Lodz ghetto inhabitants, as well as similar documentation about her immediate family members. After the diary had been translated into English in June 2011, she decided to revisit the Yad Vashem database, to see if another search, two years later, might yield more information. A record not seen beforewas revealed, which stated that Rywka had died in Bergen-Belsen at age 16. The record was based on two Pages of Testimony submitted by Mina Boier (Boyer), one in 1955 and another in 2000; Mina was identified as Rywka’s cousin. She was surely the Minia mentioned frequently in Rywka’s diary.

The 2000 Page of Testimony indicated that Mina lived near Tel Aviv, in the religious community of Bnei Brak. Dr. Anita Friedman, the executive director of Jewish Family and Children’s Services, was visiting Israel and was alerted to the possibility that one of the cousins mentioned in Rywka’s diary might still be living. Dr. Friedman immediately contacted the family. Not only Mina but Esther, the oldest cousin (Estusia in the diary), were both alive. How much could be learned by actually speaking with someone who knew Rywka, let alone the cousins with whom she lived and endured so much! And what an astounding discovery for the cousins to hear, after so many years, about the existence of this diary.

It was through conversations with Mina’s daughter Hadassah that we discovered what happened to Rywka, her sister Cipka, and her three cousins once they arrived at Auschwitz in August 1944. Cipka was immediately selected for the gas chamber, and Rywka was separated from her. Tragically, Rywka Lipszyc was now bereft of every member of her immediate family.

Along with her three cousins, Rywka was sent from Auschwitz to Christianstadt, a woman’s camp near Gross-Rosen. After months of hard labor, they were marched to Bergen-Belsen. These young women, aged 15 to 22, had survived the Lodz ghetto, Auschwitz, Christianstadt, a death march, and Bergen-Belsen, and three of them survived to see their liberation by British troops in April 1945. (Chanusia , the middle sister of the cousins, died of typhus in the camp.) According to Mina’s testimony, it was at Bergen-Belsen that Rywka died.

In the meantime, requests for documentation on Rywka’s fate had been sent to the United States Holocaust Memorial Museum (USHMM) and the International Tracing Service (ITS), as well as numerous other archives, including the Bergen-Belsen Memorial Site. Rywka’s name was identified on a list of those liberated at Bergen-Belsen. However, no mention of Rywka Lipszyc was included in the Bergen-Belsen death lists, a fact that Bernd Horstmann, the keeper of the registry, found strange. It was known, more or less, he said, who had died after liberation.

With the assistance of Steven Vitto at the USHMM, a DP (Displaced Person) Registration Record for Rywka was found among the ITS records. The ITS records were compiled after the war by the International Red Cross and the United Nations Relief and Rehabilitation Agency. This vast repository of information contains 50 million records documenting 17.5 million victims of Nazism, including those from displaced persons camps. The DP Registration Record posed many questions and mysteries. First of all, it was dated September 10, 1945 and was filled out at Transit Camp Lübeck. It appeared that Rywka had not died in Bergen-Belsen after all, but had survived for months after liberation. A handwritten note on the DP Registration Record indicated that she had been transferred to Niendorf hospital, about 18 miles north of Lübeck on the Baltic Sea, on July 25, 1945.

Copies of the cousins’ DP Registration Records show that they too had been sent to Lübeck, but their records were dated July 5, 1945, almost three weeks earlier that Rywka’s. The cousins went from Bergen-Belsen first to Transit Camp Lübeck and then to Sweden, where thousands of Holocaust survivors were sent for rest and recuperation after the war. Rywka, apparently, was transferred later, most likely through Lübeck to Niendorf.

Further communication from ITS produced a document with a list of hospital patients transferred to Niendorf hospital on July 23, 1945, because they were “too ill to be evacuated to Sweden. ” Rywka Lipszyc’s name was on that list. Why did the cousins think that Rywka had died in Bergen-Belsen? Mina told her daughter that, before she and her sister were sent to Sweden for recuperation, she had visited Rywka in the hospital at Bergen-Belsen, and the doctor told her that Rywka was dying. That was the last Mina and Esther ever heard of her.

Did Rywka die in Niendorf hospital? If so, we needed to find documentation of her death. (Until her death was definitely proven, there was still hope that she might have survived and lived a full life.) Bernd Horstmann suggested that we contact TImmendorfer Strand, the municipality that includes Niendorf. He was told by archivists there that the Niendorf hospital no longer existed and that there was no mention of Rywka in any of their municipal or cemetery records.

JFCS Holocaust Center’s archivist Judy Janec contacted Lübeck’s municipal archives; no mention of Rywka Lipszyc was uncovered, despite intensive searches. Further messages and requests to ITS and USHMM were sent, but no new material was uncovered in either archive. Similarly, the National Archives of Sweden was contacted, in case Rywka had returned to Transit Camp Lübeck and then was sent to Sweden. No mention of her name was found there.

Bernd Horstmann suggested that since Niendorf hospital no longer existed, it must have been a British military hospital, but upon contacting The National Archives of the United Kingdom, we learned that the British Army did not keep permanent records of individuals in the displaced persons camps that were set up in the British Occupation Zone after the end of the war. Those records were transferred to the International Tracing Service.

A mention of Niendorf hospital was found in a letter written by British Jewish Relief Unit (JRU) welfare worker Bertha Weingreen and published in the academic database Post-War Europe: Refugees, Exile and Resettlement 1945:1950. In the letter, which is from the Rose Henriques Archive at the Weiner Library in London, she wrote that the hospital was run by the “Save the Children fund” and that many Jewish patients who had died there were buried in the Jewish cemetery in Lübeck. Yet, archivists at the University of Birmingham, where the institutional records of Save The Children are housed, could find no additional information about the hospital.

A member of Lübeck’s Jewish community provided us with a list of names of the displaced persons buried there, but Rywka’s name was not on the list. Along with staff members at several archives in Germany, we searched for but did not discover any mention of Rywka in displaced persons or compensation claims records.

What could we do next to find out what happened to Rywka? We decided to contact the editor of Lübecker Nachrichten, the local newspaper, and ask that it publish an article about Rywka, the diary, and our search. The story was published on February 19, 2012 . No new information was immediately forthcoming, but a student of Jewish studies at the University of Potsdam, Daniela Teudt, read the article and stepped forward to offer her help. Daniela was born in Lübeck and had written her bachelor’s thesis on the Jews of Lübeck. Full of enthusiasm, familiar with the Lübeck and Niendorf areas, and a student of local German Jewish history, she volunteered to consult archives in the area and to search more deeply to learn about Rywka’s fate. It was she who compared the list of those sent to Niendorf hospital with the list of those buried in Lübeck and discovered that of the nine girls on the hospital list, five were buried in the Jewish cemetery in Lübeck. But not Rywka.

Despite years of searching, including a trip to Poland, Germany and England undertaken by the JFCS Holocaust Center’s archivist, no final documentation of Rywka’s death has been found.

If any readers have information that could be helpful in our search for Rywka Lipszyc, please contact the Tauber Holocaust Library at the JFCS Holocaust Center by email to [email protected] or by telephone at 415-449-3717. 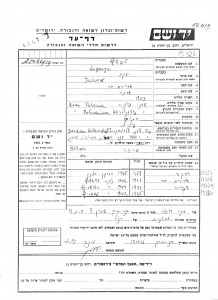 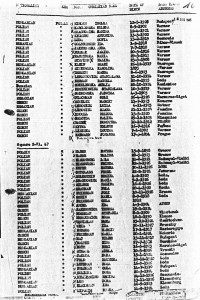 Rywka’s name is the last one on this page 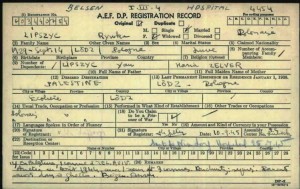 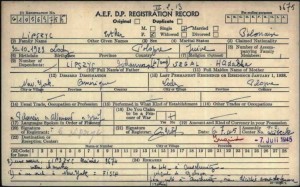 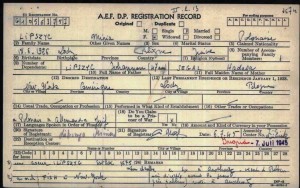 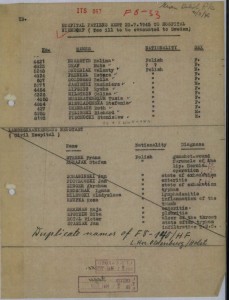 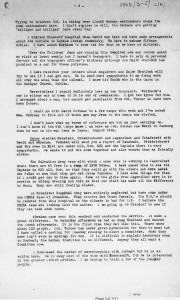 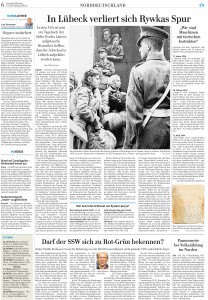 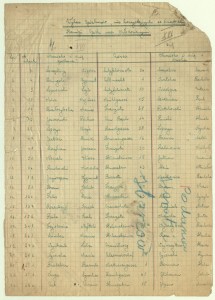 Document from Lodz State Archives, listing Rywka as being adopted by her aunt Hadassah