Born on September 15, 1929, Rywka was the eldest of Yankel and Miriam Sarah Lipszyc’s four children. A son, Abram, called Abramek, was born in 1932, followed quickly by a daughter, Cypora, known as Cipka, in 1933. The baby of the family, Estera, nicknamed Tamarcia, came along in 1937. Rywka’s parents were both natives of Lodz, Poland. Yankel—the fifth son of eight children born to Avraham Dov and Esther Lipszyc—lived with his family in close proximity to his siblings and extended relatives in Lodz.

By the time Rywka began her diary, she had lived in the Lodz ghetto for more than three years, and she had already lost both of her parents. The Germans had ruthlessly beaten her father on the street one day, causing severe and lasting injuries from which he never fully recovered. He died on June 2, 1941 as a result of lung disease and his other ailments. Her mother cared for her four children in the ghetto alone for a year before she died on July 8, 1942. The exact details of her death are not known, but she likely died from malnutrition and exhaustion.

The surviving family adopted the orphaned Lipszyc children. Rywka and Cipka were sent to live with their uncle Yochanan and aunt Hadassah, and three cousins – Estusia, Chanusia and Minia. Soon after, Yochanan, as well as Abram and Tamarcia, were deported during the infamous szpera of September 1942. Hadassah succumbed to illness in July 1943, leaving behind five young girls, between the ages of 10 and 20, who were forced to struggle on their own. It was a few months after Hadassah’s death that Rywka’s diary begins, on October 3, 1943. 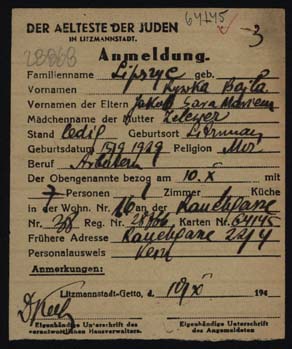 Yitzhak Katznelson’s Song of the Murdered Jewish People includes a reference to Nazi brutality inflicted on Rabbi Segal during the occupation of Lodz. Listen to Rabbi Segals’ granddaughter, and Rywka’s cousin, Esther Burstein, describe what happened >

Read this article about Itzhak Katznelson featured on the Institute for the Translation of Hebrew Literature website.

Rywka and her siblings endured one of the most traumatic events in the ghetto’s history, the infamous szpera (Polish for “curfew”) of September 1942. The German authorities demanded that the ghetto surrender for deportation 15,000 Jews under the age of 10 and over 65, in addition to the sick and infirm.

Mordechai Chaim Rumkowski, the so-called Eldest of the Jews, conveyed this appalling order to the ghetto population. In his speech, he exhorted parents to do the unthinkable in order to avoid a still worse fate for the entire ghetto population. He implored an assembled crowd of thousands of wailing and weeping parents:

A grievous blow has struck the ghetto. I never imagined I would be forced to deliver this sacrifice to the altar with my own hands. In my old age I must stretch out my hands and beg: Brothers and sisters, hand them over to me! Fathers and mothers, give me your children!

The szpera remained an open wound for Rywka and indeed for the entire ghetto population from that point forward. In January 1944, at a friend’s apartment, the conversation turned to this painful memory:

We talked about the Szpera. Ewa talked to her heart’s content and it seems that she got it off her chest. I kept silent, what was I supposed to say? … That conversation, the whole thing upset me … I don’t feel well … Oh, I have no strength … my heart has become a heavy stone … I’m choking, choking … (January 15, 1944)

While the exact fate of the unfortunates was not known at the time, the ghetto population feared the worst.

Abram and Tamarcia, Rywka’s brother and sister, were deported during the szpera, as was Yochanan Lipszyc, the father of Rywka’s cousins.

But Cypora somehow evaded the round-up. A document from the Lodz State Archives shows her name on a list of those to be spared deportation. Yochanan Lipszyc’s name was included on a list of rabbis to be spared. 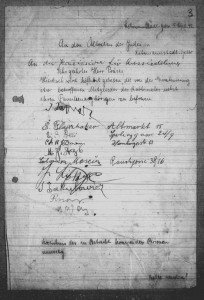 Cypora somehow evaded the round-up. A document from the Lodz State Archives shows her name on a list of those to be spared deportation. 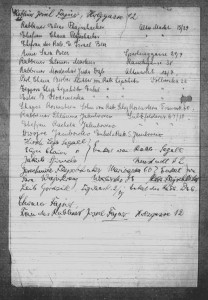 Yochanan Lipszyc’s name is included on a list of rabbis to be spared.

It is Rywka’s perspective as an Orthodox Jewish girl that sets her writing apart from other young writers’ diaries recorded during the Holocaust. Rywka viewed the world through a religious lens: she believed fervently in God’s benevolence and she strived to live according to Jewish law and ethical teaching.

Rywka most hated the occasional compulsory attendance at the workshop on Saturday, the Jewish day of rest. For religious Jews, the Sabbath—which marks the cessation of God’s labors in creating the world—is a sacred day to study, to pray, and to be with family and friends. It is meant to foreshadow the harmony and peace that will fill the world when the Messiah comes and the Jewish people are redeemed once and for all from suffering. For Rywka, working on the Sabbath was not only a violation of this deepest-held element of Jewish ritual observance; it robbed her of one of her few sources of pleasure in an otherwise bleak existence. On February 20, 1944, she wrote,

Oh, God! I’ll never forget this feeling, I felt so bad, I was suffocating, I felt like crying! Crying … crying … I watched people going to the workshops as usual. This day, this holy, sacred day is for them an ordinary and normal weekday. […] For me, going to the workshop on Saturday was a terrible agony. I thought involuntarily: if I have to do it again (I wish I wouldn’t), will it become commonplace for me, will I get used to it? Oh, God, do something so I wouldn’t have to go to the workshop on Saturday! I felt so bad! I wanted to cry!

Rywka’s struggle to hold on intensified over the course of the diary, reaching a sort of fever-pitch as winter dragged on in February and March, a new deportation order shut down life in the ghetto, and hunger became nearly intolerable. In this context, Rywka’s faith was a bulwark—sometimes the only one she had—against total despair:

How many people have wondered: why, what for, and slowly, step by step they lose their faith and have been discouraged with life. Oh, it’s so terrible! …That’s why I’m grateful to God three times over, even four, for giving me the opportunity to believe. […] If it weren’t for my faith, I, like other people, would lose my will to live. […] [H]ave patience, with God’s help everything will be all right.

Of all her activities, Rywka remained most attached to the activities of the Bais Yaacov, an organization that had been formed in 1917 by Sarah Szenirer in Kraków, Poland, as a response to the lack of religious schooling provided for religious Jewish girls. While boys traditionally attended religious schools such as Cheder, Talmud Torah, and Yeshiva, girls—if they received any education at all—were typically sent to free, generally public, secular schools, where they received minimal religious instruction. Seeing in this an explanation for the high rate of assimilation among religious girls, Schnirer created a school-based Jewish education especially for young and adolescent Jewish girls. While the foundations of the curriculum were religious and conservative, it was by definition a progressive step within the Orthodox community. Her school eventually blossomed into a network of similar schools across Europe.

Fajga Zelicka, a young teacher from the Bais Yaacov school in Kraków, began leading informal gatherings (which Rywka and others called “assemblies”) for young girls in the Lodz ghetto, reading and studying the Bible, psalms, and ethical Jewish texts such as the Pirkei Avot (The Wisdom of the Fathers) and Hovot Ha-Levavot (Duties of the Heart). At the time that she began her diary, Rywka had been attending Miss Zelicka’s sessions under the influence of Estusia’s schoolmate and friend Surcia Zelwer.