Erna Wertheim emigrated to the United States from Munich, Germany in May 1936 with her husband Hermann and their infant daughter Lilo. The young Jewish family settled in San Francisco. During the following years, Erna wrote countless loving letters primarily to her parents, Thekla Bein Lehrburger and Leo Lehrburger, but also to other relatives and friends who stayed behind in Europe.

These letters document their intimate relationship and give us insight into how the worsening situation for Jews in Europe affected those separated from their loved ones. Additionally, they bear witness to how Nazi Germany left its mark on the local Jewish community in Northern California.

After the Nazi rise to power in Germany in 1933, Jewish citizens found themselves in peril. Assimilated into German society and in some cases from families that had lived in Germany for centuries, German Jews were confronted with hostility, prejudice, and persecution.

On November 8, 1938, a nationwide pogrom – Kristallnacht (The Night of Broken Glass) – provided unshakeable evidence that Jewish property and lives were in danger. Mobs of Nazi sympathizers, encouraged by Hitler’s government, smashed windows, looted property, and burned stores and synagogues. Thousands of Jewish men throughout Germany were arrested. Frightened and heartbroken, Jewish families hurriedly made preparation to leave Nazi Germany.

Those who were lucky were able to obtain affidavits and escape, either to safe havens or to temporary exile in places throughout the world. Others were less fortunate. Doors to escape closed and millions were left behind.

This exhibit traces the path of German and Austrian Jews as they fled Nazi Germany in 1938 looking for safety and shelter. Items from the Tauber Holocaust Library’s archives document their experiences during the war years and after, as these emigrants sought to end their years of wandering and privation. 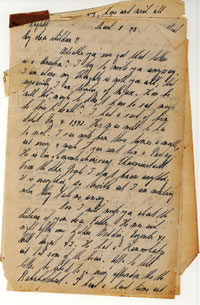 During the years of the Holocaust, as avenues of escape from Nazi persecution in Germany and occupied Europe disappeared, many European families found themselves separated — on one side were family members safely living in the United States or England – on the other side, family and friends subject to ever increasing dangers were living under Nazi rule and the threat of extermination.

These letters were the only means of contact between parents and children, husbands and wives, friends and relatives who had been cruelly divided. As time passed and the hope of rescue grew remote, the letter writers continued to reach out to those they loved through their letters and postcards.

The letters on display are those written by family and friends in Nazi-occupied Europe. The letters sent to them are lost. Selected from collections of the Tauber Holocaust Library’s archives, they provide an intimate view into the events of those years. Each letter is just one small part of a true story of real men, women and children trapped by dangerous events in a terrible time. The love, anguish, persistence, courage and heartbreak they express are a testament to each individual, the lives they led and those they lost.