After the Nazi rise to power in Germany in 1933, Jewish citizens found themselves in peril. Assimilated into German society and in some cases from families that had lived in Germany for centuries, German Jews were confronted with hostility, prejudice, and persecution.

On November 8, 1938, a nationwide pogrom – Kristallnacht (The Night of Broken Glass) – provided unshakeable evidence that Jewish property and lives were in danger. Mobs of Nazi sympathizers, encouraged by Hitler’s government, smashed windows, looted property, and burned stores and synagogues. Thousands of Jewish men throughout Germany were arrested. Frightened and heartbroken, Jewish families hurriedly made preparation to leave Nazi Germany.

This exhibit traces the path of German and Austrian Jews as they fled Nazi Germany in 1938 looking for safety and shelter. Items from the Tauber Holocaust Library’s archives document their experiences during the war years and after, as these emigrants sought to end their years of wandering and privation.

Escape and Exile
Those who were lucky were able to obtain affidavits and secure passage to safety. Doors to freedom closed rapidly and many countries turned their backs, fearful of an onslaught of refugees.

Emigrants were anxious to build new lives and to prove themselves worthy citizens of the countries that offered them refuge. Many enlisted in the military to fight for their new country against the Nazis. Refugees who had escaped to Shanghai – the only place that required neither a visa nor a passport – waited out the war under Japanese occupation.

Despite the difficulties involved in emigration, those who escaped were the fortunate ones. Family and friends who were left behind struggled to find supporters, advocates and rescuers. Jews who reached safety tirelessly sought to rescue their loved ones. For most, however, help never arrived and millions of desperate asylum seekers perished during the Holocaust.

A New Home
Refugees waited anxiously for the end of the war. Waiting in exile and in displaced persons camps, emigrants sought to end their years of wandering and privation. For many, the United States represented a new world, and their best choice for safety. Once again, still refugees, they applied for visas, obtained affidavits, gathered their possessions, and made their final journey to build new lives in freedom and peace.

After the Nazi party rose to power in Germany in 1933, German Jews faced increased persecution with each passing year. Although many Jews sought to flee Nazi oppression, most hoped that Nazi rule and its virulent anti-Semitism would be a passing phase.

It was not until after Kristallnacht, the terrible pogrom of November 1938, that the real exodus began — Kristallnacht, the Night of Broken Glass, when throughout Germany and Austria, business and shops owned by Jews were looted and destroyed, when synagogues were burned, when Jewish men were arrested en masse, and when, in its aftermath, the Nazi government required Jewish communities to pay for the destruction themselves. 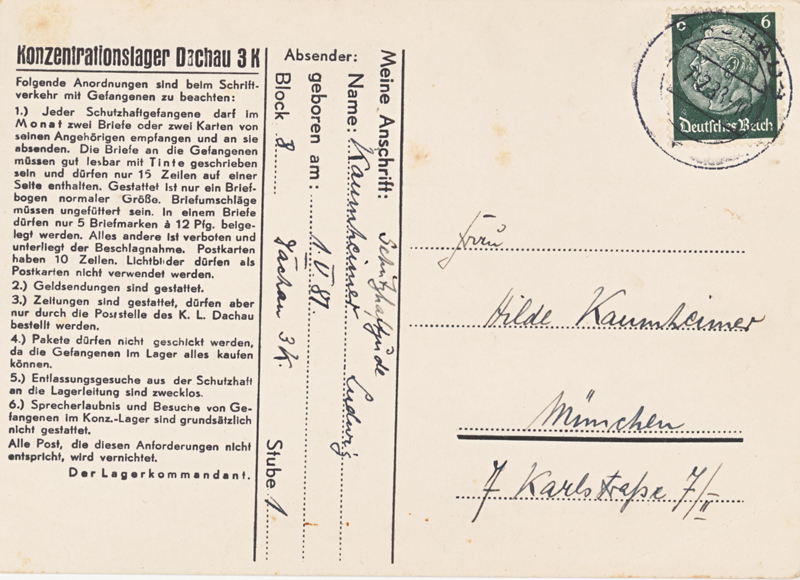 This postcard was sent from Dachau by Munich pediatrician Dr. Ludwig Kaumheimer to his wife, Hilde. She sent a letter to the Gestapo, pleading for her husband’s release and informing them that he had served in WWI and was a recipient of the Iron Cross. She was afraid he would be too modest to mention it. 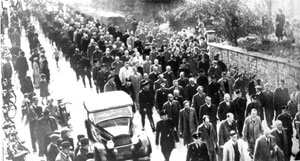 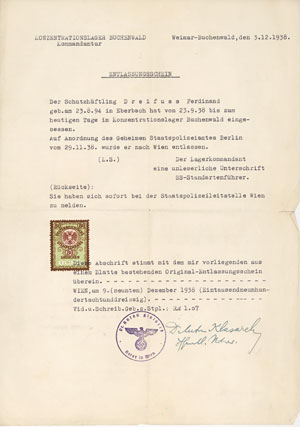 Jews throughout Germany and Austria prepared to leave, selling their possessions and businesses – some long established in their communities – for a fraction of their value, and acquiring affidavits, passports, visas and boat tickets. Many refugees were leaving behind the only home they and their families had known. Some had lived in Germany and Austria for many generations.

And finding a new home was not easy – most countries shut their doors to those waiting anxiously to flee. 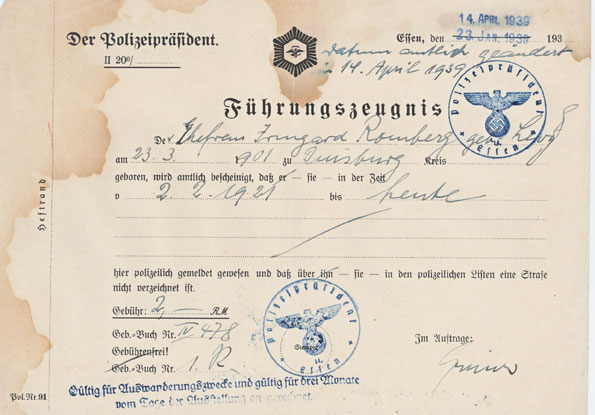 “Good conduct” documents, such as this one issued to Irmgard Romberg, were required before emigration. 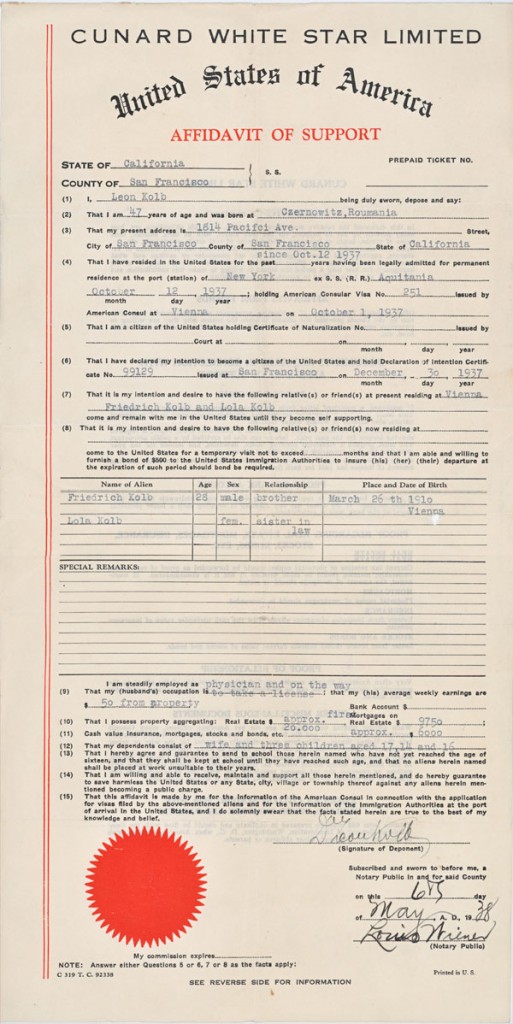 An affidavit such as this was desperately desired – it was the key to freedom.

The paths to freedom varied. Refugees fortunate enough to escape were scattered throughout the world. Those who were lucky obtained affidavits and boat passage to the United States, to Cuba, to South America. Others looked to Palestine, the traditional homeland of the Jews.

German and Austrian Jews who found shelter tried to rebuild their lives. They struggled to find work and create homes , and strove to prove their loyalty to their new countries. Young refugee men enlisted in the British and United States Armies, prepared to fight against the Nazis. 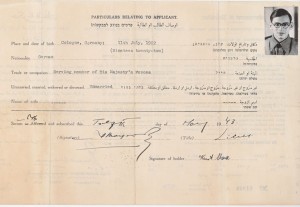 Many young men who fled Germany for Palestine enlisted in the British Army. Kurt Marx was part of the famed Palestine Brigade. 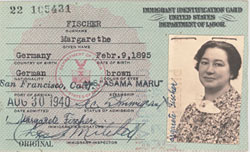 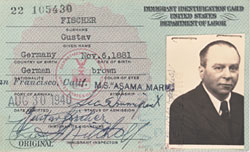 Many German and Austrian Jews found refuge in Shanghai. In the late 1930s, it was the only place in the world that allowed entry with neither a visa nor a passport. Shanghai Jewish residents gathered together in the impoverished ghetto of Hong Kew. Many arrived with nothing, but worked together to build an emigrant community with schools, newspapers, and cultural events. Enduring hardships and privations, they waited for the war to end. 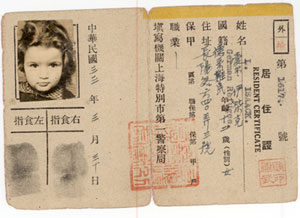 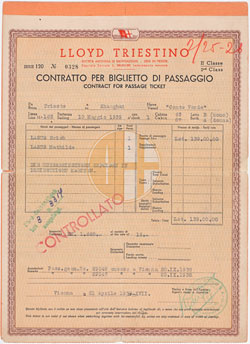 Other Jews were trapped – many struggled in vain to obtain affidavits from relatives, friends, even complete strangers. Due to immigration quotas, choices were very limited and waiting lists were long. Opportunities to escape began to vanish. Despite their desperate efforts and those of family, friends, refugee and relief organizations, countless Jews were trapped and never escaped. By 1941, the doors to freedom had closed. 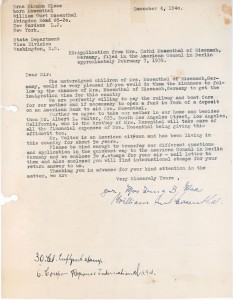 As soon as these siblings arrived safely in the United States, they began desperate attempts to free their beloved mother. Their letter to the State Department pleads for help. 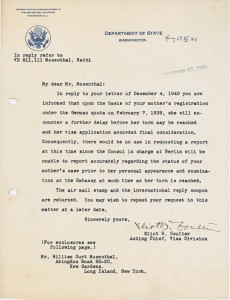 The reply from the Department of State.

After the war ended, thousands of Holocaust survivors continued to search for a home. Many of the Jews that fled Nazi Germany and occupied Europe found themselves homeless and stateless. Efforts to find a safe haven continued long after the violence and horror of the Holocaust years were over. 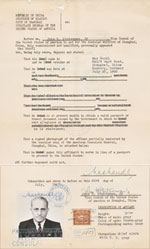 This document, issued by the US Consul in Shanghai, confirms that Max Mandl has been declared stateless. 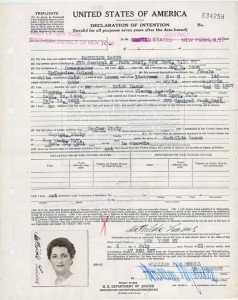 At the end many years of wandering, Edith Lasus declares her intention to become an American citizen.