What is a Symbol?

The Corruption and Reclaiming of the Jewish Star

Consider the blue and gold logo of the Golden State Warriors, with the Golden Gate Bridge in its center, or the Jewish Star of David. What gives these symbols their power?  Symbols can be hateful (eg. the swastika) or inclusive (eg. the LGBTQ+ rainbow).  The meaning of a symbol can be contested; it can also change over time.

One of the most enduring symbols of the Holocaust has always been the yellow star.  It has become virtually synonymous with the Nazi rise to power, and the helplessness of Jewish victims.  The Nazis were not the first to compel Jews to wear a badge, and as we’ll see with the help of images from the Tauber Holocaust Library and Archives, the yellow star was just one example of enforced Nazi signage.   But Jews have not been entirely helpless in the face of historical antisemitism: both before and after the Holocaust they have persistently created and embraced their own symbols.

The first law on record regarding Jewish badges dates back to 1215, when Pope Innocent III decreed that Jews “shall easily be distinguishable from the rest of the populations by the nature of their clothes.” [1]  In the Middle Ages, Jews were made to wear symbols ranging from two white tablets (the ten Commandments) to a yellow “O,” or ring, made with yellow cloth.

Jews themselves, of course, had their own traditions of signs and dress.  The Hebrew Bible was attentive to sartorial decisions—from Joseph’s coat of many colors to the multi-colored textiles that adorned the tabernacle and clothed the priests.  Jews had long embraced particular signs with the specific purpose of preserving their own difference.  Holocaust survivor and historian Guido Kisch wrote: “what Jews wore willingly usually did not have a negative connotation but as soon as clothes or badges were forced upon them, they became marks of shame.” [2]

The Star of David hardly ever appeared among the various badges worn by Jews in medieval and early modern times.  In fact, the Star of David was an ornamental sign used by a variety of civilizations in the ancient world and in the seals of both Christian and Jewish notaries in the Middle Ages.  It derived its name from King David’s shield which, in some traditions, bore a hexagram.  Nevertheless, it was not widely adopted as a particularly Jewish sign.[3]

Only in the nineteenth century did Jews begin to use the Star of David as a religious or national symbol. [4] As Romanticism surged throughout Europe, Jews looked to fashion their own sense of nationhood, based on their common history, religion, and language.  The Star of David was tangible, a symbol of hope for an end to Jewish persecution.

The Star of David in the Hands of the Nazis

When the Nazis came to power in Germany, they marked and labeled Jews in various ways—from the economic boycott of Jewish businesses (1933) to the red “J” on Jewish passports (1938). 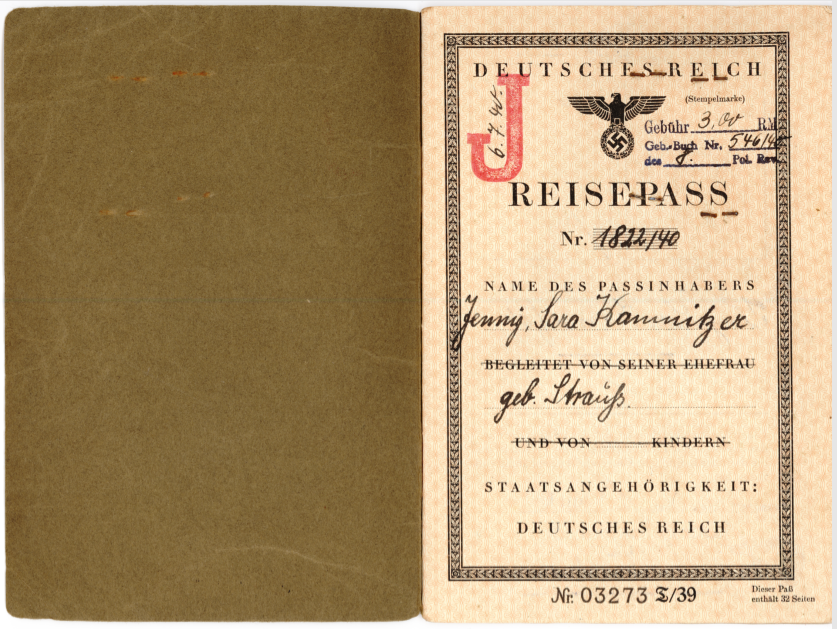 From the collections of the Tauber Holocaust Library and Archives. Jenny Kamnitzer Papers, 1988.1286.

But it was not until the Germans invaded Poland in the fall of 1939 that they enforced widespread laws regarding a Jewish badge.  As in other areas of Nazi rule in Poland, this legislation was introduced piecemeal and varied based on location. For example, Jews in the General Gouvernement (the largest Nazi administrative district in Poland), wore white armbands on their right sleeves, as seen below. 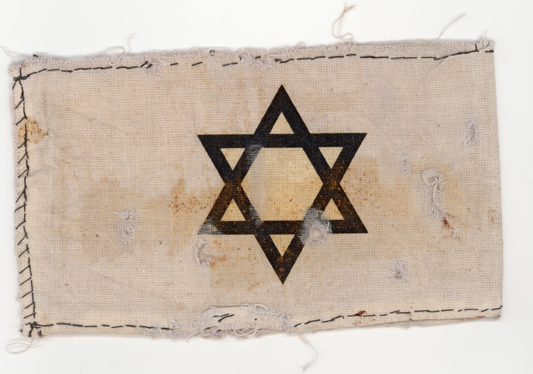 From the collections of the Tauber Holocaust Library and Archives. Holocaust Items, 2004.1002.

In contrast, in the city of Lodz, Poland an order in November 1939 forced Jews to wear yellow armbands.  This was soon replaced with the yellow star, to be worn on the chest and back. [5]

In September 1941, the Nazis imported the yellow star to Germany, introducing legislation within German borders.  In the spring of 1942, they mandated its use in Belgium and the Netherlands.  In each case, the word “Jew” appeared on the star in the local language. 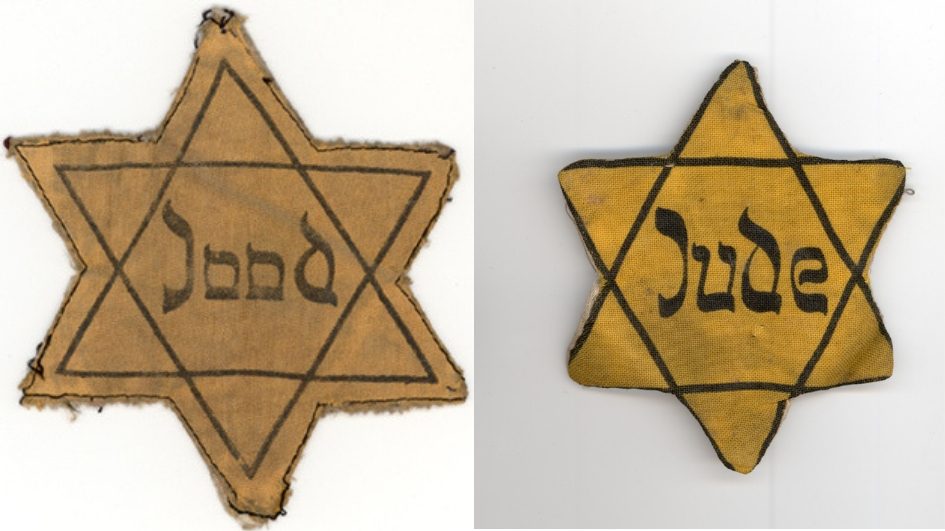 From the collections of the Tauber Holocaust Library and Archives. Star with “Jood” in Dutch, from Jacobowitz Family Papers, 1988.1115; Star with “Jude” in German, from Kurt Gunter Michaelis Papers, 2005.0006.

Reflections on Jewish Symbols after the Holocaust 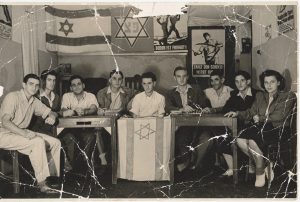 Zionist gathering in the Shanghai Ghetto. From the collections of the Tauber Holocaust Library and Archives. Hans Arons Papers, 1988.2035.

To me, the history of the Jewish badge demonstrates the malleability of symbols, rather than their eternal or enduring power.  The meaning of symbols can change over time, and different actors can endow the same symbol with different meanings.  Demagogues and social movements have the ability to manipulate symbols, incorporate them into their narratives, and use them to support the actions they wish to undertake.

Most Nazi victims did not have the freedom to resist the Jewish badge.  We, on the other hand, as citizens and consumers, have the power to think critically about the symbols in our world today.  Perhaps more importantly, we have the ability to create new symbols, or endow old signs with new meaning, as we act upon the values at the heart of Jewish tradition: tzedek (justice), chesed (loving kindness), and tikkun olam (making our world a better place).

[1] As quoted in Flora Cassen, Marking the Jews in Renaissance Italy: Politics, Religion, and the Power of Symbols. New York: Cambridge University Press, 2017: 22.