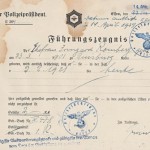 The Tauber Holocaust Library and Archives houses personal papers, government records, photographs, and artifacts as part of its archival collections. Personal papers document the individual experiences of victims and survivors of the Holocaust. German government records provide insight into government-sponsored actions of persecution and deportation; documents published by post-war Allied occupying forces reflect post-war conditions and treatment of German nationals. Photographs include a collection of Nazi press photographs, scenes of deportation, and a large collection of US Army Signal Corps photographs of the liberation of concentration camps. The Tauber Holocaust Library’s collection of archival artifacts includes items of survivors of camps and a large collection of Nazi regalia. 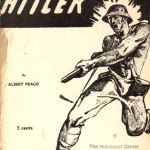 The historical pamphlet collection spans the years 1919-1983. The bulk of the collection is comprised of pamphlets published between 1938 and 1946. Pamphlets are published in several languages, including English, German, Dutch, Czech, French, Polish, Russian, Italian, Yiddish, Hebrew and Spanish. Subject topics are vast and focus on various aspects of World War II and the Holocaust.

The pamphlet collection is a rich resource for tracing events contemporaneous to the war years. It documents the world’s reaction to events in Nazi Germany as they occur, and illustrates the type of access to information that was available to those outside of occupied Europe.

The Tauber Holocaust Library’s Periodicals Collection is comprised of magazines and newspapers from the Holocaust Era. Spanning the years 1928-1947, they include Nazi organ publications; resistance periodicals from France, Holland, and Belgium; and American and British newspapers and magazines. The collection features representative Nazi propaganda newspapers such as Der Stürmer, Der Angriff, Völkische Beobachter, and Das Reich.

The Tauber Holocaust Library’s collection of survivors’ accounts includes published and unpublished memoirs, interviews, and autobiographies. The accounts are those of survivors of labor camps and death camps, refugees, hidden children and other individuals who survived the attempt of the Nazi regime to exterminate European Jewry. Survivors came from many European countries, and their accounts document a variety of experiences, including persecution, occupation, deportation, camp life, liberation, and post-war experiences.