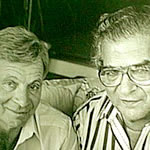 Both Max D. and Herman S. were born in Berlin and were childhood friends prior to the war. Both were taken to Sachsenhausen and kept from 1939 to 1942, after which they were moved to Auschwitz until 1944. Both escaped from Auschwitz in 1944 with the help of Joseph Runner, a German engineer. They hid in a hole dug in a warehouse and then escaped at night walking 18 kilometers to Joseph’s house. There they hid three and a half months in Joseph’s barn. They then moved to Gliwice, hiding in the home of Shine’s future wife Marion Shlesinger, whom he met while working for the camp. After liberation, Max was reunited there with his future wife Helga. Shine brought Marion from Gliwice and they were all married together on February 17, 1946, after which they made their way to San Francisco.

Max and Herman tell a truly exceptional story covering a wide panorama of experiences ranging from surviving the camps, to escape, to hiding with gentiles; with an underlying theme of their lasting bond of friendship. Their story is at turns thrilling, horrifying, moving, and even humorous and at all times an inspiration.

Max and Herman grew up in the same town and and survived the Holocaust together. They both discuss stories of torture that they witnessed and experienced as concentration camp victims.

You see, the SS dreamed up so much additional punishments. Every time something different. In fact, in the summertime they give the prisoner winter uniforms; and in the winter they give summer uniforms. And the shoes, for instance, you had 32 “solder nails” they called it. So your shoes would last a long time. If one was missing, just a cord on the camp you get three over the ass. But you couldn’t go to the shoemaker because he didn’t have any nails for you. And then from time to time, of course, every week depends, a different date, they inspected your boots and then you get the whips. Some would get as many as 20 over the ass just for a nail you can’t replace, and the same for everything else. If the button was missing we were drilled like sports, like soldiers, just to torture the people. And many of them couldn’t stand it. And if you don’t get up fast enough they stamp at your feet. They stamp on you, and then they kick you so bad all your inside comes out, you know. And if you can’t get up anymore, you are dead anyway. They just stamp on you to death. And not one. Sometimes two or three Nazis work on you. They’re called the “Blockfuhrer” with the guns and everything they have, they just do what they want with you, and there’s no way that anybody can resist.

There was one incident I will never forget. A little chubby Jewish guy from Mosemaspeden, and he was very religious. And he said, “Shema Yisrael.” And what they called the leader of the barrack was called “Blockaltester” and he told the SS man, you know, he just said to you, “Shema Yisrael.” It sounds in German like “schwarz Schwein, black pig.” The man was beaten for six solid days. I didn’t know a human being could stand that. And he still didn’t die. So they put him in a bucket with water and turned him upside down, and that was the end. I didn’t know a person could stand that kind of beating. He had no more skin, and he still didn’t die after they drowned his head in a bucket of water. Or another guy had a big belly and in the evening we had to go out in the Appellplatz to be counted, the whole camp, and they picked him out, naturally. He was standing out. So they threw him on the floor and they jumped on his belly like dancing. I mean I could tell you I have never known so many ways how people can die, how people can get killed. That’s what you learn in there, what you have seen in there.