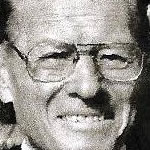 Jacob H. was born in Poland in 1932. He lived with his parents and younger brother in the town of Ludmir, where his parents ran a grocery store. In 1941, Nazi troops invaded his town, and Jacob and his family, along with all of the town’s Jews, were moved from their homes into a ghetto. Jacob and his brother were briefly detained during the first pogrom, but were set free after two days and allowed to return to their home in the ghetto, where their parents and other relatives had hidden in the potato cellar.

Jacob and his family spent the rest of the war in underground hiding places, mostly in a shelter they dug under the floor of a barn.

Jacob describes the days of the first pogrom in the Polish town of Ludmir.

In that village, there was a family, Ukrainian family, their son joined the Ukrainian police, and he worked for the police. And he spread the rumor, he told the villagers that he saw my parents being put on a truck and executed. And we had trust that he wouldn’t harm us, because he knew us since we were little kids and so on. Now, I’d like to point out that in our house in the ghetto, my parents built a hiding place underneath the floor. There was a little cellar we used to keep potatoes so they would last during the winter. And inside from that cellar they built a little hiding place, which was blocked off with boards. If you looked in, you wouldn’t see it. The place is probably big enough for four people and not more. So I knew that they had that hiding place, and this is all I knew.

Anyway, that Ukrainian caught us in that village that day, my brother and I. He picked us up, and he took us to take us to town. His parents, who knew us very well, said to him, “Safko, what are you doing? Those are our kids, You know the kids.” And he told to his parents, he said, “Are you trying to save a Jew? You’ll go to prison yourself.”

So what he did, he didn’t go back to town that night. So he put us in a cellar. He locked the cellar. Next morning he came and he picked us up, and he took us into town, walking. We walked for about 10 kilometers, seven, eight miles.

And he brought us into the German headquarters. He put us there. We sat there for about two or three hours. Then another Ukrainian policeman came. He picked us up, didn’t tell us anything. He walked us towards the ghetto, where the ghetto used to be; he opened up the wires and he let us into the ghetto.