Two years ago, Henry was a student in the JFCS Holocaust Center’s Manovill Fellowship Program. Today, Henry is a student at a university in Menton, France.

When he arrived at his French university, Henry was shocked by the acts of antisemitism he witnessed around him and the lack of Holocaust education opportunities for students. He reached out to the JFCS Holocaust Center and asked how we could bring survivor testimony to his Jewish student group. Specifically, Henry hoped to connect with Leon, a Holocaust survivor who he had built a relationship with during his time in the Manovill Fellowship. 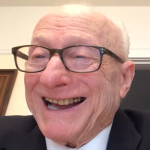 Leon was thrilled to hear of Henry’s request, and a virtual testimony session was planned. On the day of the scheduled program, an incident of antisemitic vandalism occurred on Henry’s campus. Though alarming, this would not stop Leon, who shared his testimony virtually with the French student community in need of a calming voice. 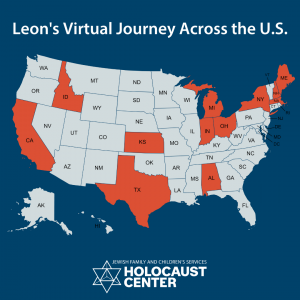 Using Zoom to Give Testimony Across the Nation and the World

In March 2020, the Speakers Bureau didn’t miss a beat in the wake of the COVID pandemic. As programs quickly moved into the virtual space, Leon decided to set a goal: to share his testimony in all 50 US states. Over the past year, the JFCS Holocaust Center has been tracking Leon’s progress on a map. He has made incredible progress “visiting” 11 states outside of California and has shared his testimony with over 5,000 individuals from the iPad in his kitchen.

Now that France has been added to Leon’s growing list, we think a map of the globe may be in order!

Learn more about the Speakers Bureau and schedule a session of survivor testimony for your school or community today.