What are “oral histories”?

Oral histories are testimonies of Holocaust survivors, recorded on audio and video tape. These personal stories provide us with an immediate way to grasp the horrors of the Holocaust.

The oral history clips on this site are excerpts from testimonies in the JFCS Holocaust Center collection. They have now been digitized and form an integrated collection within the larger USC Shoah Foundation’s Visual History Archive (VHA). This website makes them available for the first time in their digital form. 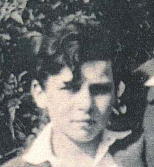 Ralph was born in Dresden, Germany in 1931. Ralph’s father was from Poland while his mother’s family had lived in the area surrounding Dresden for 150 years. He lived in an upper middle-class home and had a comfortable life.

At age 7 ½ was sent alone on a Kindertransport to England to escape the Holocaust. At the outbreak of war, he was evacuated to the English countryside to escape the expected bombing. Ralph was educated in England, including the London School of Economics, and at age 27 immigrated to the United States. In 1962, he moved to California and in 1997, he retired after 25 years in public agency real estate (including 7 years with BART – Bay Area Rapid Transit).

“I arrived in England like a parcel, like a package.”
In this first clip, Ralph describes traveling to England as part of the Kindertransport.

“We’ve got to carry on.”
In this clip, Ralph shares about the death of his father at Auschwitz.

“Calling people names because they’re different is unacceptable.”
In this clip, Ralph speaks about the lessons he hopes to share with today’s students.