The site of Auschwitz-Birkenau 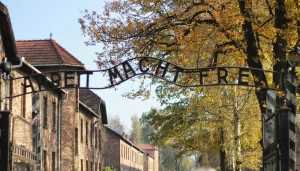 The wooden barracks, stretching off into seeming infinity as the gaps between them are shrouded in a thick white fog, the layers of barbed wire fence with pencil-trunked trees and green grass just beyond the environs of the camp. The atmosphere here is just as I’d seen it in the recurring bad dreams I’d had when I first was taught about Auschwitz-Birkenau through viewings of the film Night and Fog. Though I understand that this documentary isn’t used any more, it was the educational tool in my generation; and as we enter the galleries with the grotesque piles of shoes, spectacles and suitcases are visible behind glass I am already prepared, because those images had never left me from my first viewing back in Junior High days. 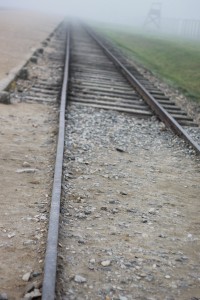 Our guide from the Galicia Jewish Museum in the Kazimierz, or old Jewish section of Krakow, had explained to us the previous day that 15-year old Polish students get a mandatory tour of Europe’s largest death camp as a school trip. This is a fairly recent thing – for Poles to get Holocaust education – and many students are brought to the camps and shown the crematorium and disinfecting rooms, etc. and told that it is on this site where upwards of 900,000 Jews were murdered, and how. The parents of these kids mostly wouldn’t know because they were not told. In Poland under Communism, the information was pointedly suppressed, and while many asked “where are the Jews?” there were still those who didn’t miss them. It will be a few more years before the generation gap catches up that the average parents living in Poland will know as much about Auschwitz and the Holocaust as their children. 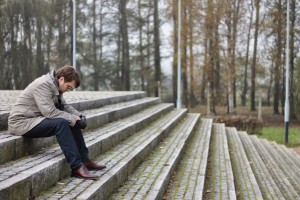 It’s a long walk from the barracks to the crematorium. When we come up to the site of the crematorium  – the fragments of brick wall emerging from the ground like a badly healed-over scar, blown up and in pieces as it is – it’s a new image I am not so prepared for. I tune out our guide’s evocative description of what the experience would have been for those about to enter and confirm to myself that I believe in God, but then the thought that follows unbidden is that that I can’t say in that moment say I believe in people, and I cry.
Many among us on the tour have direct family members who perished here. We take the opportunity to light candles and say kaddishby the site of buried human ashes and a memorial plaque at Auschwitz I and also by the crematorium at Auschwitz II. Before Rabbi Daniel leads us in saying the prayer of mourning, he frames our surroundings by saying, “This is a cemetery and a sacred space. We are paying our respects. We are not on a tour.” It’s a frame I need, and a helpful way to reconcile the phrase Holocaust Tourism in my mind and the disturbed feeling I’ve gotten from seeing signs in the hotel lobby or on trams in the street advertising Auschwitz-Birkenau as an ‘attraction.’ 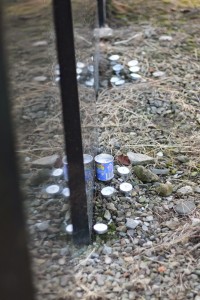 We have had an emotional day, but there is strength in being together. Auschwitz is a place where you can come away feeling disgraced and disgusted by the overwhelming evidence of human cruelty, the industrialization of death and degradation. More than that, though, I wanted to think about the indomitable human spirit – of those who managed to survive and go forward to live positive lives, or among those who spent their last days or hours at the camp found a way to be kind to the others around them or hold on to their faith and their humanity even as they were being stripped of everyone and everything. Yes, this site of massive atrocity is also the hallowed ground of innocent souls. Can there be anywhere else on this earth quite like this – at once both sacred and so profane?
Janice Prudhomme, JFCS Development Associate
To view more photos, view the Legacy Study Tour album on Facebook.